Fall Art Auctions Could Provide Over $100 Million to Botanical Library 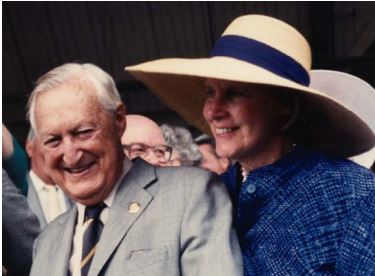 A privately owned botanical library is about to get a massive donation, thanks to the will of its extraordinarily wealthy founder. Sotheby's recently announced that it will be offering over 2,000 pieces of fine art, jewelry, furniture and other items from the collection of the late Rachel Lambert Mellon in a series of auctions this fall. Sotheby's has estimated the value of the collection as “in excess of $100 million.” The beneficiary is the Gerard B. Lambert Foundation. The foundation supports horticultural projects, most notably the Oak Spring Garden Library, on the Mellon estate in Upperville, Virginia, 60 miles west of Washington. Sotheby's explains, “The Oak Spring Garden Library, Mrs. Mellon’s celebrated collection of rare books, manuscripts, works of art and artifacts relating to gardening, landscape design, horticulture, botany, natural history and travels, is world-renowned and among the finest of its kind.”

Rachel Lambert “Bunny” Mellon, who died this past March at the age of 103, represented a combination of two great fortunes. Her grandfather, Jordan Lambert, was the inventor of Listerine. Her father, Gerard Barnes Lambert, turned that invention into a fortune. He was a President of the Gillette Safety Razor Company, and a founder of Lambert Pharmacal, which later merged to form the giant pharmaceutical company Warner-Lambert (now part of Pfizer).

Her husband, Paul Mellon, came from an even wealthier background. His father, Andrew Mellon, and his uncle were the owners of Pittsburgh's Mellon Bank, founded by his grandfather. Paul Mellon was heir to a fortune when his father died. The first Fortune Magazine listing of the wealthiest Americans (1957) placed Paul Mellon, his sister, and two cousins, as four of America's eight wealthiest people. Paul Mellon did not share his father's love for banking. Not needing a day job, he became one of America's greatest philanthropists of the 20th century. He was instrumental in the creation and funding of the National Gallery of Art in Washington in 1937. In the 1960's, he gave his important collection of British art and rare books to Yale University. Paul Mellon died in 1999, at the comparatively young age of 91.

“Bunny” Mellon did not have a day job either, though that was the norm for women of her generation. That did not stop her from becoming an expert in the field she loved – horticulture. She not only designed her own gardens, but those of close friends. Her work was greatly admired by a good friend, Jacqueline Kennedy. She helped Mrs. Kennedy spruce up her own place, and then, after Mrs. Kennedy's husband was elected President, she took on the task of redesigning the White House Rose Garden. The two would remain close for the remainder of Mrs. Kennedy's life (she was Caroline Kennedy's Godmother), Mrs. Mellon being a staunch Democrat despite her husband being a very conservative Republican. Opposites attract.

Meanwhile, Mrs. Mellon began building her horticultural library. The buildings were designed by noted architect Edward Larrabee Barnes. Mrs. Mellon designed the gardens. By this time, she had already built a large collection of botanical books, which according to a Vanity Fair article from 2010, consists of 3,500 rare and historical books and manuscripts and 10,000 modern reference works. Amazingly enough, Mrs. Mellon was never trained in horticulture. She was self-taught.

In a book from 1989, Mrs. Mellon described the Oak Spring Garden Library this way: “This collection of books and drawings grew as a way of life, not just a gathering of rare and interesting books bought at the enticement of an enthusiastic bookseller, but chosen one by one for their special and unusual contents and design, as well as their relationship to books already part of the collection.” The “enthusiastic bookseller” quote is a bit amusing as her son from her first marriage was a Washington, D.C., bookseller.

In her will, Mrs. Mellon provided that her botanical library, the library building, including its furniture and art, and 100-300 acres of land including the buildings and greenhouses thereon, be dedicated to implement the “Library-Garden Plan.” This plan instructs her executors to operate the library and surrounding acres for the “public benefit.” She further wrote that “It is my expectation that...Gerard B. Lambert Foundation...will provide the financial support to operate the Library-Garden Plan as a resource for education and training generally in horticulture, botany and landscape design and related fields of nature.” This auction will undoubtedly add substantially to the foundation's endowment with which to carry out this call for financial support. Currently, the Oak Spring Garden Library and grounds aren't open to the public in the sense of regular visiting hours. However, requests to visit the library “for a specific research purpose” are welcome, with a response promised within a day.

Dates and details about the auction will be forthcoming as we get closer to fall.