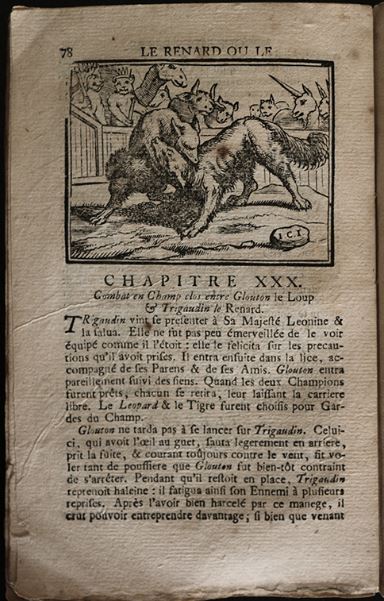 Le Procès des Bêtes is even more disturbing when you read the highly informative preface of the 1739 edition (Bruxelles), which is missing from the Amsterdam one: “This story isn’t pure fiction, but an allusion to the story of an Austrasian Count, as told by Eccard who traces back the word renard to the name of this Count: At the end of the 9th century lived in the Kingdom of Austrasia a Count named Reginard or Reinard (...). A councillor of King Swentebold, he was eventually disgraced, and then retired to his castle. A very subtle politician, he regularly excited the French or the Germans against his King to suit his interests.” Here, animals have been openly used to talk about humans. “The various animals featured in this book,” continues the anonymous author, “are the symbols of the various conditions of Man. The lion and other strong animals represent the Nobles, meaning Kings, Princes, Dukes and such. The cock, the badger, the monkey, the dog, the cat and such represent the common people. (...) The best way to attract the attention of the youths being to entertain them, we therefore propose to educate them through entertainment.” But just like Machiavelli’s The Prince, our book depicts men not as they should be, but as they are—it doesn’t deal with morality but with worldly wisdom, states William J. Thoms. Thanks to these animals, we can tell our kids about the wild world we’re living in—there are many Trigaudins out there, and the sooner they learn about it, the better. Forewarned is forearmed.

The Wheel of Nature

Trigaudin is eventually freed of all charges. “You are necessary to this Court,” states the Lion. “No one is your equal as far as penetration and memory are concerned. I appoint you Stadhouder (a Dutch title) and Governor General of my States.” In fairy tales, the wicked are punished. In the real world of animals, they triumph! Of course, Trigaudin’s enemies are villains themselves—hey, what a world these creatures are living in!—, and the fox often tricks them by flattering their vices. At the end of the day, the most valuable teaching of this book is probably that morality has nothing to do with merit in life, and that it hardly rules our lives. Man is first and foremost an animal and can’t help but act accordingly. Remember the fable about the scorpion who wanted to cross the river? “How do I know you won’t sting me?” asked the frog he approached to carry him on her back. The scorpion shrugged: “Because if I do, I’ll die too.” That made sense. But when the two animals reached the middle of the river, the scorpion stung the frog to death: “But—why did you do that?” wondered the dying batrachian. “You will die with me, now.” The scorpion retorted: “Couldn’t help myself—it’s my Nature.”

Morality isn’t a natural phenomenon; it is a manly invention—one that separates us from animals. Now, fables featuring animals question our kids about their social environment, but they also question us: is there a mastermind at work behind all our tribulations? Is someone watching over our shoulders, rewarding or punishing us according to our deeds? Or are we just like these dumb animals around us? Can we readily plunge our innocent kids into boiling water and wait for God’s judgement? Le Procès des bêtes doesn’t care about all these considerations, and closes on a terrible sentence: “The wheel of Fortune keeps on turning, to maintain some in fear, and others in hope”—all is said about the bestial condition of Man on Earth.