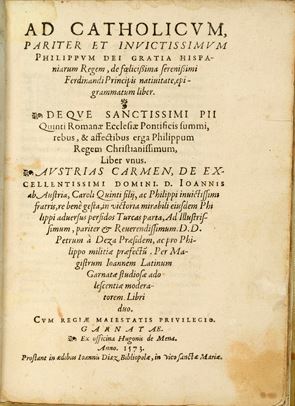 Perhaps institutional book collections are not growing at the rate they once did. Tight budgets, increased access to content through digital copies, space limitations and such have been a hindrance in recent years. Some institutions have pared back, or sold particularly valuable items to raise cash. And yet this month we have news from the University of North Carolina that their library has reached 7 million books. Obviously, the bad news has not yet reached Chapel Hill. According to the staff, the UNC Library is now one of only 21 university libraries to hold 7 million books.

Why would a library need 7 million books? Perhaps a look at number 7 million can help us understand why libraries still accumulate books. It is a very old book by a very remarkable person. The book was a gift of the Hanes Foundation, which has made many other contributions to the library. It is a book of poetry, published in 1573, and written by Juan Latino. Though the book is in Latin, Latino was Spanish, in a manner of speaking. We say that because he was either born in West Africa, or if not, his mother was. She was brought to Spain a slave, and Latino either came with her, or was born in Spain, but also a slave.

Book number 7,000,000 is generally known as Ad Catholicum, though the longer (but still incomplete) title is Ad Catholicum pariter et invictissimum Philippum dei gratia hispaniarum Regem, de foelicissima serenissimi Ferdinandi Principis navitate, epigrammatum liber... We include the longer title as its translation is telling - “To the Catholic and most invincible Philip, by the grace of God King of Spain, on the most blessed birth of his most serene Prince Ferdinand, a book of epigrams.” Latino clearly wanted to stay on the good side of the powerful, as being either a slave, or black former slave (which is unclear), he was undoubtedly on thinner ice than most, with much to lose.

Latino was born in 1518, most likely in Spain though possibly in Africa. Either way, he was a slave. His master was a nobleman, a count, and he became friendly with the Count's son, the future Duke of Sessa. The family's relationship with young Juan, as he was named, was not what one typically expects of a slave. He accompanied his master's son to school, where he also attended classes. Juan proved to be exceptionally smart. He learned his lessons, and became particularly well educated in Latin, hence obtaining the last name “Latino.” He was also prolific in Greek. Latino would go on to become an instructor at the University of Granada, a position he held until his death in or near 1595.

Being a successful black in a white nation so long ago would sound like an impossibility, but Latino perhaps managed the situation by being something of a novelty. There weren't enough black Africans in Europe at the time to engender too much concern. More disliked were the converted Moors and Jews of Spain, whose loyalty to Christianity was regularly questioned. Indeed, Latino referred to his heritage as Ethiopian rather than African. The ancient Kingdom of Ethiopia had connections to Christendom, while Spaniards thought of Africans as North Africans, in other words, Islamic Moors.

Surprisingly enough, Latino was able to marry a white woman, apparently with no great problems. His noble master's blessing was sufficient. She was even the daughter of a nobleman. It seems likely that Latino was officially granted his freedom shortly before his marriage, though it is not certain that he was. The couple had four children. Latino taught the children of nobility, wrote three books of poems over his lifetime (this is one of them), and was well respected by both the political and religious establishment of his time. His color made him something of a curiosity, but Latino used that as a positive, rather than fighting it. This would not have been a time to rock the boat over racial issues. Latino appears to have been able to live out his life with surprisingly few problems for someone born a black slave in 16th century Spain.

We can add one more first for Latino – there was a play written about him during the following century, with the obvious title Juan Latino. It was the first play about a black man written by a European white man. Latino comes across as a positive figure, a man of color who is a true Christian, unlike those supposedly reformed Moors, the unpopular Moriscos.

So what we have here is a book which, though it might not seem that special on the surface, tells an amazing story when we dig deep down into history. Undoubtedly, many more of the other 6,999,999 books at the UNC library tell similar tales. Yes, there is still a place for books and libraries, and we are happy to see North Carolina join the select members of the seven million club.