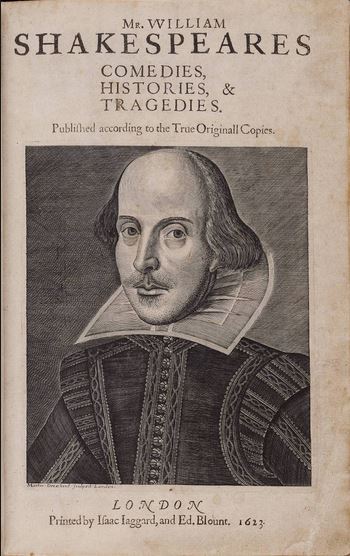 The Director of the Senate House Libraries at the University of London has resigned over an aborted plan to sell four of the library's Shakespeare folios at auction. Director Christopher Pressler tendered his resignation early last month. Libraries are increasingly facing issues related to deaccessioning old works as needs or wants dictate changes in direction. However, this was not the typical such case, and its circumstances made it particularly controversial among the academic community. It was so controversial that the library was forced to cancel the planned sale and the chief librarian decided it was best to step down.

The library had planned to sell four Shakespeare folios, all from the 17th century. One was a first folio, one of the most desirable books ever printed. The four in total were estimated to bring around £5 million, $8 million in U.S. dollars. A couple of reasons were given. One was that the library wished to add to its collection of 20th and 21st century manuscripts. A more general reason was to increase the library's endowment such as to attract more readers and restore National Research Library funding it lost in 2006. Academics, for the most part, found these reasons of dubious merit for an act as momentous as the selling of Shakespeare folios.

The library had justified its plan by noting that these were duplicate copies. However, academics argued that each copy of books of this age is unique because of constant press changes, making each essential for study by scholars. They also noted that only 232 copies of the first folio are known to exist, and most are now overseas. An auction sale might well result in a purchase by a wealthy, foreign private collector, resulting in one fewer copy remaining in Shakespeare's homeland.

Sir Brian Vickers, a Shakespearean scholar and visiting professor, was particularly pointed in his disputing that multiple copies were essentially the same. The press changes could contain information that has puzzled scholars for generations, bitingly concluding, “so to sell them is an act of stupidity of the highest order.”

Adding further to the controversy was the fact that the books had been bequeathed to the library as a permanent gift in 1958 by Sir Louis Sterling. Sir Louis was born in America of immigrant parents. He went to England in 1903 to sell phonographs and stayed, becoming a dominant force in the phonograph and radio business in Europe. His expectation was that the Shakespeare folios would permanently remain in the University of London's library collection.

Simon Eliot, Chairman of the History of the Book at the university's Institute of English studies, speaking of abandoning Sir Louis' directions, wrote a letter stating, “It will cast a long and dark shadow over SHL [Senate House Libraries]. Who in the future will trust it? How many collections will it not be offered, how many givers will turn away with the reasonable feeling that the Library and its Trustees cannot be trusted?” Mr. Eliot also observed that the books had already been transferred to Bonham's auction at the time a call went out for comments, making it appear the purpose of soliciting comments was just to (hopefully) receive support for a decision already made.

Matters were made still more controversial when it became known that Director Pressler had a long time relationship with a staff member of Bonham's, the auction house selected to make the sale. University regulations require that any such relationships be revealed because of the possibility of a conflict of interest. While acknowledging that rules were not followed, the university, in accepting Mr. Pressler's resignation, emphasized that it was satisfied with his assurances that he acted in good faith and in the best interests of the library. The Bonham's employe was reportedly not involved in the sale.

Libraries will continue to face tough decisions in the years ahead, as current needs may compel changes, even with regards to books once donated “permanently.” Forever is a very long time. However, as Mr. Eliot observed, “This is not the first case of a library asset stripping its collections, nor will be the last, but it is a particularly egregious example.” Less egregious examples will be harder to decide.