From the Police Blotter: Book Thief Sues Prison Over Their Library; Book Theft in the Electronic Age 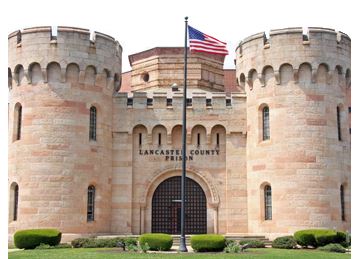 Some criminals have more nerve than others. From Lancaster, Pennsylvania, we have the story of Hans George Alexander, first reported by the Lancaster Intelligencer Journal. Mr. Alexander had the honor of being a guest of the Lancaster County Prison for five months after he borrowed a few books with no intention to return them. We are not sure how he felt about the room accommodations, but he definitely was not pleased with the guest library. If Mr. Alexander is to be believed, and with his record we are not sure why he should be, the collection of books was sparse at best. Perhaps he should be believed, since he pleaded guilty to his original crime, at least one sign of honesty.

Mr. Alexander also claimed he was only allowed to visit the library for one hour a week. Apparently he didn't appreciate the fact that he was already spending more time at a library than 90-something percent of the rest of his fellow Americans. Besides which, if there weren't any books in the library, what's the point of spending more time there?


Alexander made his claim on constitutional grounds. He cited the 1977 Supreme Court case of Bounds v. Smith, which held that a prison must provide either a law library or access to trained legal advisors. The Supreme Court decision was based on a prisoner's right of access to a court. You can't lodge an appeal if you don't know the rules to petition a court, so prisoners have a right to information on how to file an appeal. Most prisons opt for resolving this requirement by putting a few books on a shelf. Alexander argues Lancaster County put too few on its shelf.


Of course, Lancaster County has denied the claim. It maintains it has a library, and since even Alexander has admitted that there were some books available, the question is whether they were sufficient to constitute a “law library” within the meaning of the Supreme Court decision. Since that was not spelled out in the case, someone will have to make a judgment. Perhaps he will succeed in getting the prison to put a few more books on the shelf, and maybe he won't.


We do not expect Mr. Alexander will succeed in getting his primary demand in this case. If he does, those five months in prison will be the most rewarding days of his life. He has asked for $5 million in damages, a million a month. Like we said, the gentleman does have a bit of nerve. He has requested the money “for all the pain and suffering I endured while in custody.” Perhaps he doesn't fully understand the purpose of prison. It is not supposed to be a fun place. The “pain and suffering” is meant to be a learning process, one that discourages you from ever returning. This is how prisons differ from most guest residences. You get no rewards points to encourage you to come back. They never want to see you again.


One more point about Mr. Alexander which shows he has more nerve than the typical thief. The original theft (four books valued at $250) was from from the law library at the county courthouse.


In other news, we see our first case of electronic book theft. From Japan it was reported that Takahito Kan and Shuho Kikuzawa were charged with stealing 200,000 yen ($2,000) worth of electronic books. This is a little different from book theft as we know it. There were no briefcases or overcoats used in the crime. There were no scissors to cut plates or maps out of the pages. Nothing physical was taken, save maybe a few electrons. Those are small enough to stick in your pocket with no one noticing. This theft was committed by using apps. Apparently, the alleged thieves obtained some sort of an iPhone application that convinced the store's server that a payment had been made, thereby enabling them to download the books free. Even book thieves are geeks these days.