This is Crazy: Mary Todd Lincoln to be Retried for Insanity 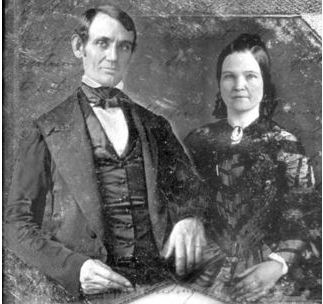 Mary Todd Lincoln, wife of President Abraham Lincoln, did not have an easy life. It is also fair to say she was not always the steadiest of individuals. She was probably always a bit unstable. That is not to say her issues were such as would prevent her from living a “normal” life. She did. Unfortunately, she would be visited by some of the most unendurable of personal tragedies imaginable. It would be enough to push even the most stable of people over the edge.

Mary Todd was born in Kentucky, but not in a log cabin. She didn't wear a coonskin cap. Rather, she lived in a large house in Lexington. It needed to be large, as Mary Todd had 14 siblings from her father's two marriages. Her mother died when she was six, and while she did not have the greatest of relationships with her step mother, life was not bad. Mary moved to Springfield, Illinois, to live with her sister in 1839. We all know who she met there. Actually, she met Stephen A. Douglas, Lincoln's rival in debates, a senatorial race, and eventually a presidential race. She chose Lincoln, and if Douglas had the more successful political career for the next 20 years, her husband was the victor when it mattered most.


Abe was a busy man, what with all that lawyering he needed to do to support the family. The result was that most of the responsibility for raising the kids fell on her shoulders. The closeness to the children must have made the tragedies even worse. She had four sons. Her second son died in 1850 at the age of four. Midway through her husband's term as President, her third son died. It was a great strain.


Mary Todd Lincoln was never very comfortable in Washington society. Sure, she was born to the higher society of Lexington, but Kentucky is still Kentucky, and Washington is Washington. She attempted to make up for any perceived deficiencies by spending lots of money on nice things, but that rarely works. Meanwhile, her husband was burdened with the horrors of war, and she shared in those burdens, visiting wounded soldiers and helping as best she could. She was steadfastly loyal to the President's policies and the Union, but it could not have helped that she was from a border state and several of her siblings fought on the side of the Confederacy.


Of course, we all know what came next. Mrs. Lincoln was at her husband's side that terrible night at Ford's Theater when he was assassinated. The Secretary of State eventually had to insist she leave her husband's side after he died, so overcome by grief was she. There had always been signs of her being a bit different, but this event would send her into a downward spiral. How much worse it must have been when yet another son died in 1871.


Mary always had a fear of poverty, afraid that the lifestyle to which she was accustomed would one day be torn away. She managed to secure a $3,000 annual pension from Congress in 1870, though she really didn't have any financial needs. What she had was fears, and she became convinced she was running out of money, despite reassurance from her one surviving son, Robert. She took to sewing bonds in her dresses for security. Her grief unrelieved, she began conducting seances, supposedly conversing with her late husband. Eventually, she became convinced her one surviving son was dying, though his health was fine. Under the circumstances, how could anyone blame her? She visited her son, thinking he was ill, and claimed someone tried to poison her on the train. Her expenditures on items like dresses she didn't need and never wore was alarming to Robert Lincoln. Other incidents were reported, such as hearing imaginary voices. He did not know what to do, so eventually, he decided he needed to protect her from herself. In 1875, Robert had his mother committed to an asylum. When she resisted, a trial had to be held which deemed her insane.


Was she insane? Mary Lincoln did not think so. She wrote letters seeking help to her lawyer and his wife. They were sympathetic. They pushed for her release, and the whole situation became an embarrassment for all involved. At the rehearing, the director of the asylum conveniently declared she was sufficiently cured to go home. Mary went to live with her sister. Mrs. Lincoln would go on to spend several years in Europe before returning to Springfield. She died there in 1882.


One hundred and thirty years have passed since Mary Todd Lincoln passed on, but evidently we are not going to let her rest in peace. No, on October 1, Mrs. Lincoln will again go on trial for insanity. Is this crazy? Thankfully, this time Mary will not have to attend. She doesn't need the aggravation. She is, hopefully, in a better place.


The retrial of Mary Lincoln's sanity will be held at the Lincoln Presidential Museum in Springfield on October 1. We expect she will be acquitted this time. That's usually what happens at these “retrials.” There is no need to beat on the poor woman anymore. There is not a sharp line between sanity and insanity. Mary undoubtedly lived closer to that border than most, appearing to have crossed the line at times, other times safely back in the comfort zone. Robert was not a heartless son worried about preserving her money either. He was a last surviving son, carrying the weight of the family's burdens on his shoulders, with a mother who exhibited behaviors that at times concerned him for her safety. It was a family tragedy that unfortunately played out in public because these two were the closest relatives to a martyred hero.


So, was Mary insane? What difference does it make? It brings me back to a personal family story from long ago. My great uncle George was a bit of a rogue. Sometimes he did things that perhaps didn't exactly follow the rule book. My grandfather, on the other hand, followed the rules to a “T.” He might seem an unlikely defender of Uncle George, but George had been married to his sister. Sadly, she died at a way too early age, before I was born. My grandfather's explanation for standing up for George was simple. As he said, George was the love of his sister's life. That's all that mattered. Mary Lincoln was the love of one of the greatest men this country has ever known. That's enough. Rest in peace, Mary.