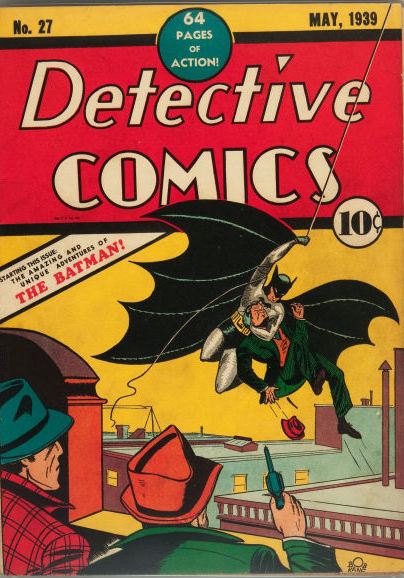 The first appearance of Batman took in over half a million dollars.

When our mothers threw out our old comic book collections years ago, we all breathed a sigh of resignation, and moved on. It was not until many years later that we really began to wonder if she did the right thing. Comic books began to show up as collectibles, bringing in prices worthy of investing in a few decades of storage in the attic. In short order, those triple digit prices began climbing to six digits. The wonder turned to astonishment. In the past few years, we have seen comic books pass the $1 million mark (usually for a first appearance of Superman), and last year one even surpassed $2 million. It may be baffling, but the time has come to move past bewilderment to understanding.

In late February, Heritage Auctions held a comic book sale. Most of the top items came from the collection of Billy Wright, an obscure collector who began buying comics as a child in the late 1930s and kept them for the rest of his life. Wright died in 1994. Somehow, he managed to hide them from his mother (actually, it appears that Wright's mother was one of those people who saved everything he owned, perhaps the sentimentality explained by Wright being an only child). Wright had no children and never talked about his collection. His grand-nephew discovered it years later while cleaning up the basement. Even then, it took a while before he realized the value of what he had uncovered.


Nothing in Billy Wright's collection broke the old record price for a comic book, not even close. At just over half a million dollars, the top item was less than one-fourth the all-time record. No, what made this auction special was the total volume of dollars bid. Almost $8.8 million was taken in during the auction. This really says more than does a couple of obsessed collectors chasing a first appearance of Superman. What this auction showed is the depth of comic book collecting. It takes more than a few very wealthy, intense aficionados to pull this off. It requires a substantial base of dedicated collectors. Comic book collecting has come of age.


The numbers, really, are quite astounding. How often is there a sale of regular books that takes in $8.8 million? What printed books can bring in $2,161,000, as did a copy of Superman last year? Other than an Audubon elephant folio, or a Shakespeare first folio (or a Gutenberg if one ever appears for sale again), not many. This is even more remarkable considering comic books were printed in large quantities (often hundreds of thousands if not more), they are relatively recent, come with no dust jackets, expensive bindings or anything better than cheap paper, and the expensive copies aren't even signed or inscribed. They are just comic books that could be bought for a dime six or seven decades ago. How many printed books with such attributes sell for the prices we are seeing for comic books today?


The explanation surely resides with their familiarity to the current crop of collectors, often from, or close to, the baby boom generation. This is what they grew up with. These are the “books” they purchased when young, read in their rooms at night, collected on their shelves (until Mom threw them out). Comics are a part of their lives. Some people collect others' lives, but increasingly, we collect our own lives, especially our childhood. While I have no statistical evidence to support this, I'm going to go out on a limb and say more of us read Superman than Proust when we were young. I'm not saying this is a good or a bad thing. It just is. Consequently, if we are very wealthy, we shell out $2 million for Superman, but something less for Marcel.


At the top of the Heritage auction was Detective Comics #27 from 1939. This one featured the first appearance of Superman's top competitor over the years for preeminent superhero status – Batman. Batman added a bit of strangeness to the typical, all-American type of superhero represented by Superman. As a result, he fit more easily into the darker images that made him the bigger draw at the box office in recent years. Bruce Wayne does better at the theater, though Clark Kent is still the top draw in comic books. This first of Batman took in $522,813, well beyond its estimate of $200,000.