Court Strikes Down Google Settlement and Part of Google Books 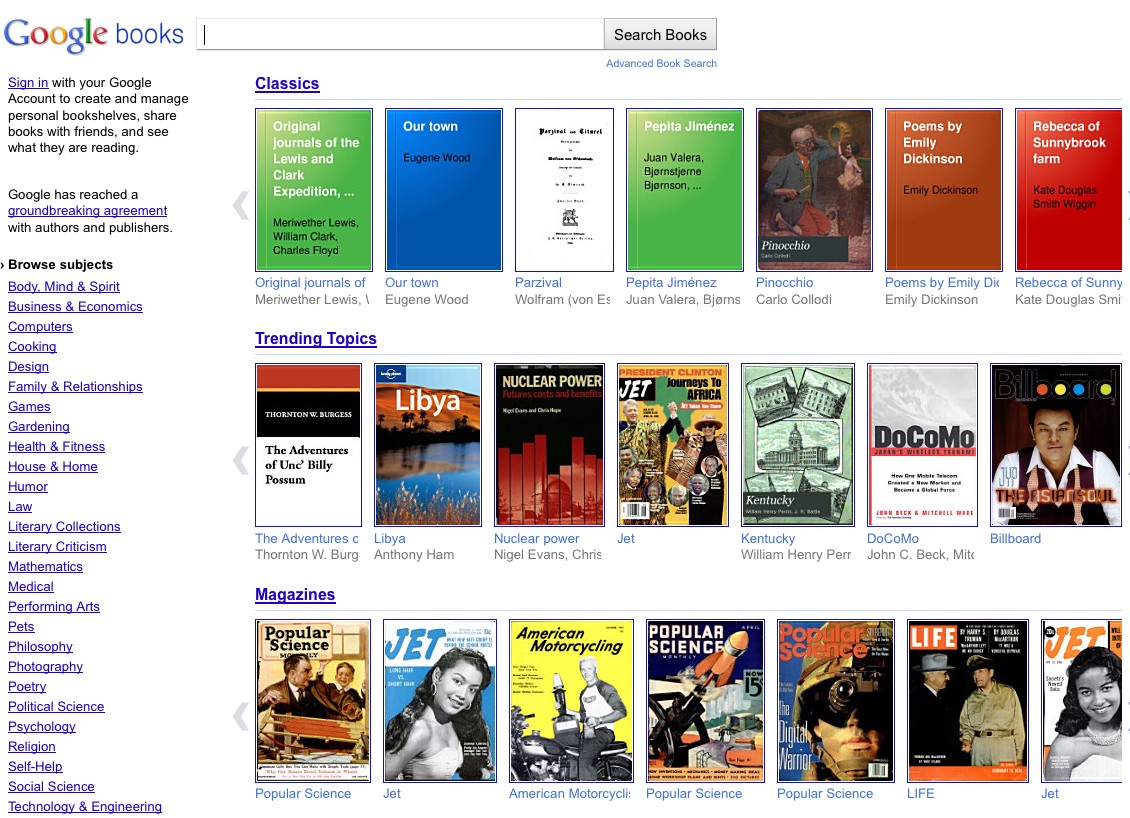 Court rules that fewer titles can be made available in Google Books.

"The benefits of Google's book project are many.  Books will become more accessible. Libraries, schools, researchers, and disadvantaged populations will gain access to far more books. Digitization will facilitate the conversion of books to Braille and audio formats, increasing access for individuals with disabilities.  Authors and publishers will benefit as well, as new audiences will be generated and new sources of income created. Older books -- particularly out-of-print books, many of which are falling apart buried in library stacks -- will be preserved and given new life."

- from the Judge's decision in the Google settlement case, before striking it down

Naturally, the Court struck down the deal that would have allowed all of these great things to go forward. This is Wonderland we inhabit, where up is down, good is bad, and old laws are applied in such a literalistic fashion as to have no relation to reality. It's like saying the government can tap your phone whenever it likes because the founders never specifically said you couldn't tap phones when they wrote the Bill of Rights in 1787.

The Google settlement arose out of Google's massive digitization project for old books. Google has scanned millions of books, and now makes them available online, some in totality, some through "snippets," some free, others for a fee.

Normally, if you want to use and republish someone's copyrighted work, you should first seek their permission. This was essentially the basis of Judge Denny Chin's decision. However, there is a problem here, what is generally referred to as "orphan books." Locating the holders of the copyrights of these books is virtually impossible. Anyone, with a little digging, can figure out who still holds the copyright for Gone With the Wind or The Great Gatsby. However, for every Gatsby there are thousands of books that disappeared from print decades ago, their authors long dead and forgotten, and whoever may own their copyrights essentially impossible to find. Chances are the legal copyright holders are a bunch of grandchildren or great grandchildren who don't know they hold these legal rights. They may not even know that Grandma wrote a book in 1925 that has been out of print and hasn't earned a nickel for anyone in 85 years. These books may be valuable for researchers and others, but fewer and fewer copies can still be found in libraries. Then, along comes Google, digitizes them for nothing, makes it possible to do keyword searches inside the book to find obscure references, and makes them instantly available to everyone around the world through the internet. Too good to be true? Apparently.

Organizations representing writers and publishers sued Google to prevent it from making these books available to the public without proper recompense. Fair enough. The copyright holders have legitimate rights. So, they sued. After long negotiations, Google reached a settlement with these organizations, the settlement that was just struck down by the court. It essentially provided that 63% of the proceeds from selling digital copies of these books would go to funds on behalf of the copyright holders, while Google would get the rest for the enormous investment in digitizing the books and making them available. Authors who put in their claims would be paid, funds due those who could not be found would be held for five years, and then given to literary charities. Any authors who objected to this arrangement could opt out and Google would strike their books from their database. This appeared to be a reasonable enough settlement for all parties involved.

Not so fast. A whole host of objections were raised, but the two that seemed to most reach the Judge's ear were copyright violation and anti-trust concerns. First come the copyright issues. We can have children living in rat-infested hovels, no food on the table, crime at the door, parents on drugs, and you will not get anywhere near the indignation that you will over the copyright rights of a long-dead person to a book no one has bought in decades. It's touching. The number of corporations, organizations, and individuals standing up to this terrible wrong was overwhelming. Some 500 petitions were filed with the court, the "vast majority" in opposition. It may be too late to protect Grandma, but we can still protect the rights of her 40 great-grandchildren to their 1/40th share in something financially worthless, and prevent the world from having access to this material in the process. Microsoft, Amazon, Yahoo, and a host of others, many competitors, objected. And, even though the settlement required Google to use "commercially reasonable efforts" to locate the rights holders, and let any who wished withdraw their books from the settlement's terms, the court just could not abide the injustice.

The court quoted a letter from two literary agents who "expressed this concern eloquently":  "The situation we find ourselves in now is one of dismay and powerlessness, with only the weak ability to "object" or opt out. We beseech you to give authors back their rights." Powerlessness? Dismay? Weak ability to opt out? They send one notice to Google and they are out of this agreement forever. This is powerlessness? Literary agents don't know how to send a letter? We beseech you to get real.