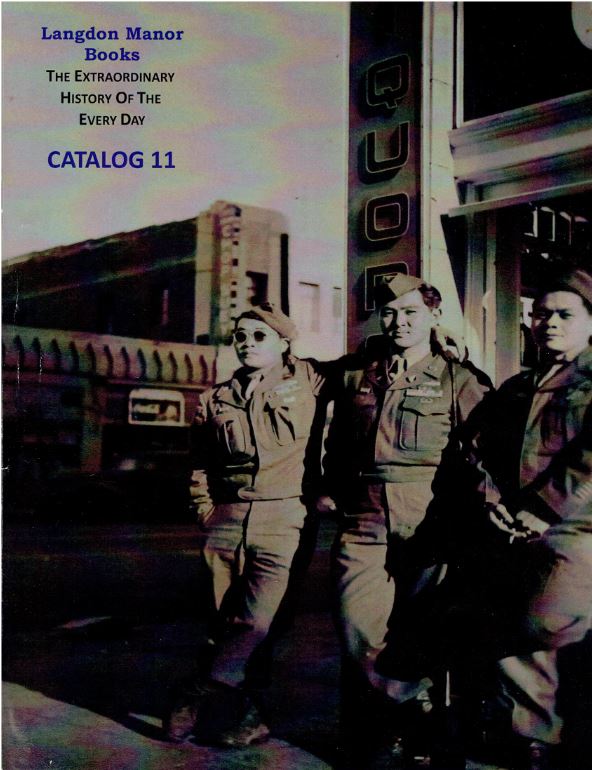 Langdon Manor Books has issued their Catalog 11. They specialize in personal accounts, often archives, photograph collections, and other personal memorabilia. They also focus on social movements and minority issues. There is little here that you have seen before as so much is unique or extremely rare. This particular collection also contains a large selection of Western Americana and will be of great interest to those who collect this field. Here are a few selections from Langdon Manor's latest catalogue

William F. Cody was an exceptional scout and buffalo hunter, but it is unlikely he would be remembered today if he weren't an even better showman. His Wild West featured an aggrandized version of the Old West, one that thrilled audiences on the east coast and in Europe. It featured both cowboys and real Indians, who performed native dances and displayed hunting and other skills. If they were a bit stereotypical to please audiences, Bill did treat them well and respectfully, not all that common in his era. One man who got to know Bill well was Robert Farrington Elwell, a native of Massachusetts. Elwell was a trained engineer but also an artist, and after several sessions sketching scenes from the bleachers, the old scout introduced himself. Bill was impressed with Elwell's art and invited him to come to Wyoming with him. Elwell became both an artist for Bill and an associate, they becoming close friends after several years together. Elwell likened it to a father-son relationship. He planned on several books, about Buffalo Bill, ranching, and the West in general. He hand-wrote about 615 pages while in Arizona between 1928-1932, but his planned books never were published or completed. However, they have survived in this archive, which includes some of Elwell's drawings. Item 36. Priced at $23,500.

Here is a second archive that goes perfectly with the previous one. It is the visual counterpoint to it. It is a collection of 66 photographs of Native American performers from Buffalo Bill's Wild West. They were taken late 1880s to around 1900. Some were photographed during performances, others “backstage.” There are men performing traditional dances, including one in front of a painted mountain scene. Others show children. Some Indians are on horseback and a group is pictured on and around a stagecoach. Langdon Manor believes most are Lakota Sioux including American Horse (the Younger), a rival chief of Crazy Horse who preached greater cooperation with the Whites. He became a major performer in the Wild West shows. Item 25. $5,000.

Here is an odd and very surprising newspaper. It is the October 1, 1944, issue of The Oflag 64 Item. Oflags were German prisoner of war camps, primarily for officers. This one was only for American Army officers and a few other personnel. It was located in German occupied Poland, previously having been a Polish boys' school to which barracks were added, then a British and Soviet officers prison camp before used for American officers. It was not a great place to be – food was rationed and scarce, winter cold, and there was little to do. Without Red Cross packages food would have been barely enough to survive. Nonetheless, the Germans sort of kept to treaty requirements for how they treated captured enemy officers. Considering how Soviet officers and soldiers were quartered, or even killed, and even worse yet how the Nazis murdered millions of Jews and others, even of their own nation, it was the best you could get. Surprisingly, they were allowed to publish their own newspaper with chatty news and descriptions of shows and other entertainment. This one includes pictures of “The Girls We Left Behind,” evidently from photographs of wives or girlfriends back home. The paper was printed by a Polish security guard and his wife who had taken over a local print shop. A separate sheet lists the names of 100 prisoners by state and the names only of another 101 that recently arrived. While things seemed relatively positive considering their situation, it would get worse the following year as Soviet troops marched toward the camp. Those prisoners who could walk were forced to march 400 miles through cold and snow to another camp, many dying or being killed along the way, some escaping. Those who survived were liberated a few weeks later by American troops. Item 52. $400.

This letter was written by James E. O'Hara, the second African American congressman from South Carolina, elected post-Reconstruction but before white Democrats sufficiently rigged registration requirements to prevent most Blacks from voting. The letter was written in 1884 to the Republican Campaign Committee concerning Black voters in Ohio. There was no chance Republican James Blaine would carry South Carolina so O'Hara was canvassing African American voters in Ohio which was up for grabs. O'Hara has good news for the Blaine campaign. He writes, “I can safely say that we will not lose any colored vote in the state except a few that may vote the Temperance ticket on the Western Reserve and probably a hundred at most in Cincinnati. Beyond this you can count the colored vote of Ohio solid for the ticket.” The results went as hoped for Republicans in Ohio as Blaine carried the state, but he lost the presidential election to Grover Cleveland anyway. Item 6. $500.

This is an interesting marketing newspaper put out by the Los Angeles Creamery. Offered is Vol 1 No. 1 from September 15, 1890, of The Creamery. From one cow in 1884, George E. Platt grew his creamery into Los Angeles' largest dairy. He used humor to get his message across, as can be seen in this paper. It contains cartoons, one, though unnamed, obviously of Platt himself. The L. A. Creamery was just six years old at this point but Platt proclaims, “we are ambitious of accomplishing individual prosperity [and] we propose to steadily and surely extend out business relations and secure just as large an array of customers as we can and shall take all honorable means to accomplish the wished-for result.” Platt accomplished those goals although there is some question whether he always limited himself to honorable means. He was found guilty of selling higher end “cream” that was actually plain milk mixed with condensed milk. He was also shot by an associate who claimed Platt stiffed him of the commission on a real estate deal, he barely surviving a very serious wound. While Platt is not well-known any more, his one-time bookkeeper is, especially by those involved with books. Raymond Chandler worked for Platt before he became a writer. The L. A. Creamery was eventually taken over by J. C. Penney's (the person, not his store) Foremost Dairies, it taken over by Knudsen Foods in 1985. Item 15. $750.