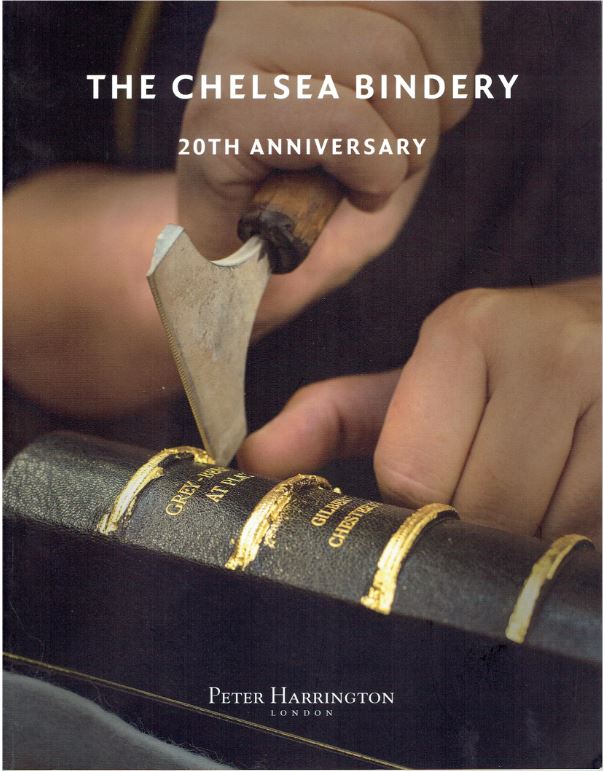 Peter Harrington has published a catalogue celebrating The Chelsea Bindery 20th Anniversary. The Chelsea Bindery is sort of a relic of the past. It specializes in traditional leather bindings fashioned by skilled bookbinders, as was done before everything was automated. There is much work by hand, centered around equipment once used by the Zaehnsdorf Bindery. Zaehnsdorf was a legendary British bindery in business a century and a half from the early 19th to the late 20th century. Several of the people now operating the equipment trained at the Zaehnsdorf Bindery. They brought with them skills as rare as the equipment itself.

It should be pointed out that the books bound at Chelsea are not just notable for their fine bindings. They are books of importance worthy of their bindings. It is not uncommon today to see books bound with beautiful covers that are otherwise quite ordinary. The focus is on something of physical beauty for display only. The books offered by the Chelsea Bindery would be highly collectible in any binding, Chelsea's aim being to make them as attractive on the outside as they are significant on the inside. Here are a few samples of what they created.

We start with an item that has a striking cover. The title is Breakfast at Tiffany's, Truman Capote's classic novella from 1958. This is a first edition, first printing. Better known than the book is the film adaptation, in which Audrey Hepburn played the role of Holly Golightly. The Chelsea Bindery has bound this book in pink morocco, with a silhouette in black morocco onlay on the cover. The silhouette is unmistakable to anyone who has seen the movie. It is that of Hepburn in her Golighly role, wearing a black Givenchy dress and holding her iconic foot-long cigarette holder. Diamond embellishments on her jewelry add luxury and a sparkle. Item 5. Priced at £2,750 (British pounds or approximately $3,670 in U.S. currency).

This next one is also a classic, though not nearly as well known as the previous book. No one ever made a movie of it. How could they? It's a photo book. The photographs were taken by Swiss photographer Robert Frank, but the title is The Americans. Frank came to America in 1955 and spent the next two years roaming around the country. He snapped some 28,000 photos, of which he selected 83 for the book. What he created was a look at America in the 1950s, from the rich to the poor, in candid pictures. His most famous one was taken in New Orleans, a shot of a passing trolley, windows open, passengers looking out. In the front are the white riders, in the back the black ones. It captured segregation in the South just a few weeks before Rosa Parks refused to give up her seat. Frank first published the book in France in 1958, his having found it difficult to interest an American publisher. Item 29 is the U. S. edition from 1959. It was not very well received, reality at times being hard for Americans to accept. The book was able to gather more attention as Frank convinced a noted American writer and traveler himself, Jack Kerouac, to write the introduction. Chelsea has created a dramatic cover for this book as well. The cover is one large American flag. £4,500 (US $6,012).

This is the story of a boy who didn't listen to his parents when they told him to “grow up.” Item 55 is Peter Pan in Kensington Gardens, a 1906 limited edition, #381 of 500, signed by illustrator Arthur Rackham. If there's a more famous illustrator than Rackham, his/her name does not come to mind. However, author J. M. Barrie asked Rackham to do more than just illustrate the book. Barrie had introduced the Pan character four years earlier in The Little White Bird. He asked Rackham to create a new book from the chapters in the earlier one related to Peter Pan. This edition was signed by Rackham. The binding uses red morocco with an onlay inset illustration by Rackham, with the caption “The Lady with the Balloons who sits just outside.” £6,000 (US $8,010)

This next book also features a character who could fly, and is also a first. However, he was no young boy. This was the Man of Steel, Superman! Superman was the creation of high school friends Jerry Siegel and Joe Shuster. Siegel wrote the stories, Shuster provided the illustrations. They created several stories and strips in their early years, with at best marginal success. Then, in 1938, Superman made his debut on Earth in Action Comics, a conglomeration of strips. Superman clicked. The character and the comic were a great success. Four years later, Superman for the first time appeared in book form. Item 43 is The Adventures of Superman, with the busy Jerry Siegel turning over writing duty to George Lawther. Shuster still provided the illustrations. This is a first edition, first printing, in a Chelsea binding. The book is in crimson morocco with a gilt title and two raised bands on the spine. The cover features an image of mild-mannered newspaper reporter Clark Kent in his superhero outfit with the familiar SUPERMAN logo. £2,750 (US $3,670).

Ian Fleming is well known for his James Bond novels, but if you are a skilled writer, there is no reason those talents can't be applied to different genres. Certainly, children's stories are very different from spy thrillers. Item 25 is the three volumes, bound in one, of Fleming's Chitty Chitty Bang Bang, published 1964-1965. They are first edition, first impressions. Fleming used to tell his son bedtime stories. This one was about a family and its magical car. Similar to his Bond novels, Chitty Chitty Bang Bang was turned into a very successful film, though it appealed to a different audience. This Chelsea binding features green full morocco with gilt and two raised bands on the spine. In the lower corner of the cover is an onlay color image of the Chitty Chitty Bang Bang car. They probably could have used this image on the cover of The Grapes of Wrath as well to depict the Jodes' car. £2,750 (US $3,670).