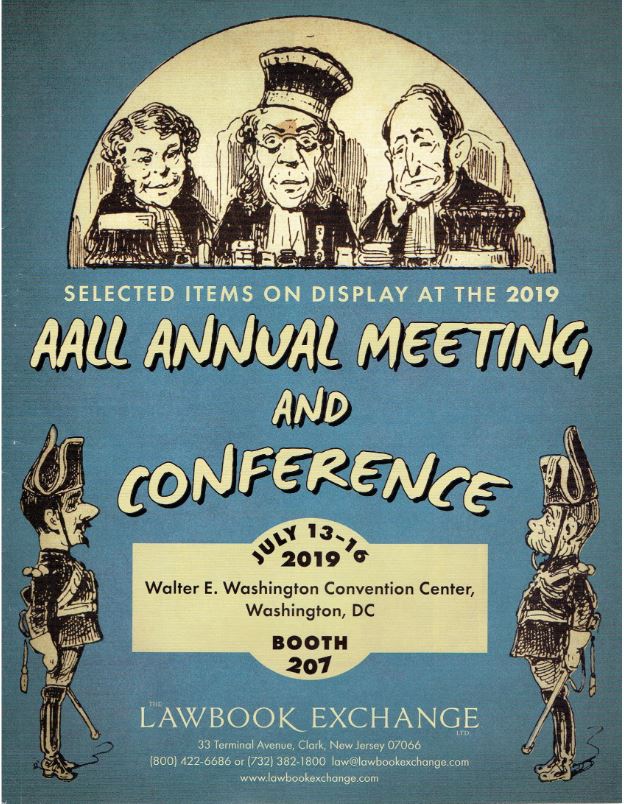 The Lawbook Exchange created an abbreviated catalogue of Selected Items on Display at the 2019 AALL Annual Meeting and Conference. The AALL is the American Association of Law Libraries. They held their annual meeting this summer in Washington. We presume that if you are running a law library, these are the sorts of items you would want to have available. The descriptions in here are short or abbreviated, but the Lawbook Exchange directs readers to their website for more detailed information. Here are a few of the selections that made their way to the recent conference in Washington.

We begin with an item that will be interesting to every American, legal scholar or layperson. The title is, The Greatest Burglary in U.S. History. Robbery of the Northampton National Bank. The Cashier Overpowered at Midnight, Tortured, And Forced to Give the Combinations to the Vault and Safe: Eight Hundred Thousand Dollars in Money and Bonds Stolen. $25,000 Reward. That truly was an enormous amount of money for the time, considering this was published in 1876. However, the Lawbook Exchange tells us it actually underestimates the amount of money stolen. It was $1.6 million worth of cash, bonds and other securities. They also note that this is the equivalent of $26 million today. That also says the reward was worth $406,000 today. The perpetrators turned out to be a group of criminals known as the "Rufus Ring." They reportedly were responsible for most bank robberies in the country during the previous decade. The reason they picked the Northampton, Massachusetts, bank was that the employee of the company that installed the safe worked for the Ring. He made a duplicate of the key. However, the safe required both a key and a combination. The night of the robbery, they entered the home of the teller who knew that combination. They tied up his family, dragged him to the bank, and tortured him until he revealed the combination. By the time his wife broke free and called for help, the thieves were gone. The Pinkertons were called in and eventually three of the robbers were captured and sent to prison, but the identity of the ring leader was not known until after his death. The securities and bonds were recovered, but the cash was never found. The author of this account was Oscar Edwards. Item 32. Priced at $350.

The next item asks the provocative question (at least in 1925) Should There Be Labor Laws For Women? Author Mary Anderson's resounding answer is "Yes." Ms. Anderson was a Swedish immigrant who had been a dishwasher and factory worker. She worked her way all the way up to being the first Director of the Women's Bureau in the U.S. Department of Labor in 1920. Prior to her appointment, she had been a member of the National Women's Trade Union League of America for 20 years. She held the Labor Department position until 1944. This pamphlet is a reprint of an article that had originally appeared in Good Housekeeping. Ms. Anderson argued that the conditions women worked under demanded extra protection for them, which was opposed, interestingly enough, by many who promoted equality of rights for women. Item 1. $125.

Next we have a 1982 Supreme Court slip opinion for a case that sounds like an issue at the forefront of political discourse today. Item 78 is an opinion for Plyler, Superintendent, Tyler Independent School District et al v. Doe, Guardian et al. A slip opinion is an early printing of a decision, still subject to proofing for technical changes but containing the gist of the opinion. The case involved the children of undocumented immigrants. Texas had passed a law denying enrollment in public schools to children not legally admitted into the country. In a 5-4 ruling issued by Justice William Brennan, the court struck down the law. It determined that it violated the equal protection clause of the 14th Amendment. That requires a state to provide equal protection of the law to any person in its jurisdiction, which it would not be doing if it denied an essential benefit - education - to some such children, who had no choice but to be there. This copy of the slip opinion has been signed by Justice Brennan. $750

Item 5 is a third edition of Sir William Blackstone's An Analysis of the Laws of England. It was published in 1758, two years after the first edition. This is the book that provided the outline for the most important English legal text ever, Blackstone's Commentaries on the Laws of England, published in 1765. This would be the primary legal text in England and America for over a century. This was the first edition to include Blackstone's Discourse on the Study of the Law. $1,200.

Now it's time for a scandal. Item 86 is The Trial of R.J. Fergusson, Esquire, For Adultery with the Countess of Elgin, Wife of the Earl of Elgin, published in 1807. Robert Fergusson was a lawyer who was elected to Parliament in 1806. He was also a noted amateur geologist. The Countess of Elgin was Mary Bruce, wife of Thomas Bruce, 7th Earl of Elgin. The Earl was appointed Ambassador to the Ottoman Empire in 1799, but shortly before leaving, he married Mary Nisbet of a well-off land owning family. The Earl is best known to history as owner of the Elgin Marbles. These are not the little round things children play with, but sculptures or parts thereof of marble statues taken from the Parthenon. You could never take such things out of their native country today, but this was 1803. The government of Greece has been trying in recent years to get them back but the British Museum has not acquiesced. The Countess and Fergusson became involved in some behavior unbecoming of a lady and a gentleman and the Earl sued. He won a judgment of 10,000 pounds, which an online inflation calculator says is the equivalent of 815,000 pounds today. The Elgins then divorced and Mary married Fergusson the following year. $1,250.