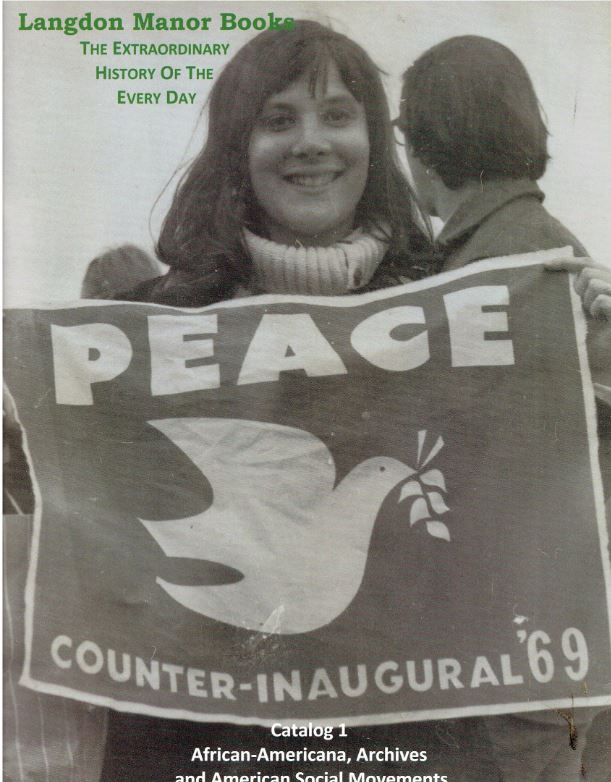 Langdon Manor Books of Houston has issued their Catalog 1. African-Americana, Archives and American Social Movements. Social movements, along with American personal narratives, photo albums and outsider books, are Langdon Manor's specialties. In these politically tumultuous times, there is much to learn from yesterday's trials and tribulations, though we seldom do. History does repeat itself. It's just a matter of figuring out which historic lessons are about to be repeated next. Here are some samples of the material found in this first catalogue.

We begin with the last gasps of slavery, a day when many African Americans were not just treated inhumanely, but were regarded by the law as property, not humans. Item 30 is an Auditor's Warrant for compensation for a slave who lost his life as a result of being impressed into service by the Confederacy. We know him only as Tom, the property of South Carolina plantation owner Nathan Henry. As of 1860, Henry owned 24 slaves, half of them age 10 or younger. Impressment was approved by the Confederacy in 1863, allowing for the seizure of property for the war effort. Tom was around 26 years old when he was impressed in September 1864. He was described as "stout, healthy and intelligent." He was appraised, like any piece of property, with a financial value. Tom's was $6,000. Tom was sent off to work building fortifications on James Island. However, he became ill. One affiant said that he became ill because he was "unnecessarily whipped and abused and...not fortified with rations." He was sent back to Henry's plantation, but he was already very sick. Tom collapsed and three days later died. Ultimately, the claim was allowed for half of Tom's appraised value. The award, naturally, went to Tom's owner, not his kin. Priced at $850.

Slavery ended the following year, but integration into American institutions took much time. Item 17 is a military recruitment broadside for the First World War, issued in 1918. It is headed REGISTRANTS! Serve Your Country With The Skill Set That is Yours. Sixty-five skill sets were listed, and African Americans were recruited too. However, they were only recruited for seven skill sets: blacksmiths, bricklayers, buglers, carpenters, chauffeurs, clerks and cooks. African Americans were sought only for physical tasks, and combat roles was not among them. Nevertheless, by the end of the war, 40,000 black soldiers had participated in the fighting anyway. $400.

Here is another remnant of segregation. It is a copy of the book The Cradle of Texas, History Stories, by Sallie Glasscock, published in 1937. This is a common book, not notable to African American history except for the embossed seals and stamps on it. They note that it belonged to the Colored Branch Houston Public Library. Houston had a private library, open only to whites, as far back as 1854. The local Women's Club set about raising funds to construct a library building in 1899, but did not raise enough. Fortunately, Andrew Carnegie provided funds for the construction of a library building in 1901, finished three years later. However, Houston's blacks still could not read their books. In 1909, African Americans sought their own library, and with the aid of another Carnegie grant, one was built in 1913. Eight years later, both libraries became part of the new Houston Public Library, but blacks still were limited to the Colored Branch. It would not be until 1961 that this branch was finally closed down, the structure demolished the following year. Item 5. $100.

This item combines segregated groups working together for a good cause. Such were conditions in 1943. It is a program for Football 930th Field Art. Bn. vs A. & T. College. This was for a football game to take place on December 4 in Durham, North Carolina. On one side was the 930th Field Artillery Battalion, originally part of the Illinois National Guard, who would serve in Italy the following year. Their opponent was the team from A&T College, today North Carolina A&T. While the school was black and the military unit segregated, the sponsor of the game was a whites-only orphanage. However, the beneficiary of the proceeds of the game was a black orphanage in Oxford, N.C. Item 27. $275.

Item 15 is the medical records of Dr. Cyrus O. Weller, from the years 1881-1884. He was a physician in the small town of Columbus, Texas, located along I-10 between Houston and San Antonio (of course it wasn't on I-10 in 1881). Dr. Weller was born in Tennessee, educated in Philadelphia, and married a local woman whose family emigrated to Columbus. This assuredly explains why he ended up in this small Texas town. He was a well respected physician in Texas, and moved his practice to Austin in 1885. This perhaps explains why these years are in their own ledger. What is notable about this ledger is that the majority of Dr. Weller's patients were black. Langdon Manor did a census check on about the first half of the patients listed and those showed that 72% were African American. It is not known whether this was for humanitarian reasons, business reasons, or simply reflected the make-up of the surrounding population. We do know he provided much care for the indigent during a yellow fever epidemic in 1873, so we can surmise that Dr. Weller was a caring man. The thousands of listings in the ledger disclose names of patients, dates and prices of treatments, and what sort of treatments were provided, such as vaccinations, tumor removal, amputations, tooth removal, and more. $2,500

Langdon Manor Books may be reached at 713-443-4697 or LangdonManorBooks@gmail.com. Their website is found at langdonmanorbooks.com.