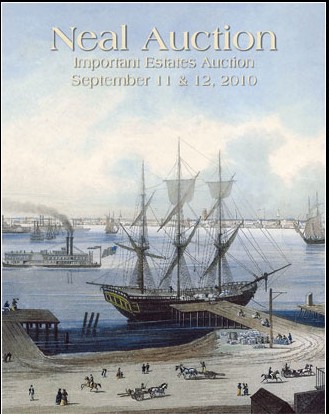 Five years after Katrina ravaged New Orleans, the city has substantially recovered. Life has returned to a semblance of normal, those parts of the city built on high ground flourishing even as lower lying areas continue to struggle. For Neal Auction Company on 4038 Magazine Street sitting well above the flood crest in the old city as disaster ensued, the worst problems were averted. Later, with the city under forced evacuation because essential services were cut-off, Neal temporarily moved its offices to Baton Rouge. They held their first post-Katrina sale at the Mississippi Museum of Art in Jackson, MS. that December. For them, returning to the Big Easy a few weeks later, recovery would be more straightforward than it was for many others. Their audience it turns out is national, their location important for consignors but incidental to bidders who pursue good material wherever they find it.

So it was that the business resumed and has since increased. The internet, that has been more destabilizing than Katrina for many in the works on paper field, turned out to be part of the solution for them. Location it turns out has been subsumed by information and Neal, understanding this, focused on carrying its messages to the far corners. As a result the company, once mostly local, today sells most of what it offers to national and international audiences. "We're a New Orleans company selling to a national, even international audience" is how the company explains it.

Tucked into this description of historical material, natural history prints, maps and decorative arts is an eighty lot consignment from Graham Arader of King of Prussia, Pennsylvania including "sixty-four Audubon prints, maps, images and folio books" according to Marc Fagan, Director of Consignments who is organizing the print and map portion of the sale for Neal. "New Orleans is the center of the Gulf Region and Mr. Arader's material sympathetic to southern tastes and preferences." Mr. Arader's consignment follows by a year his single owner sale at Sotheby's that, according to an Arader Galleries spokesman ultimately raised $1.8 million for charity. Among the listings:

For those looking up rather than out there are John James Aububon's double folio hand-colored aquatint engravings.