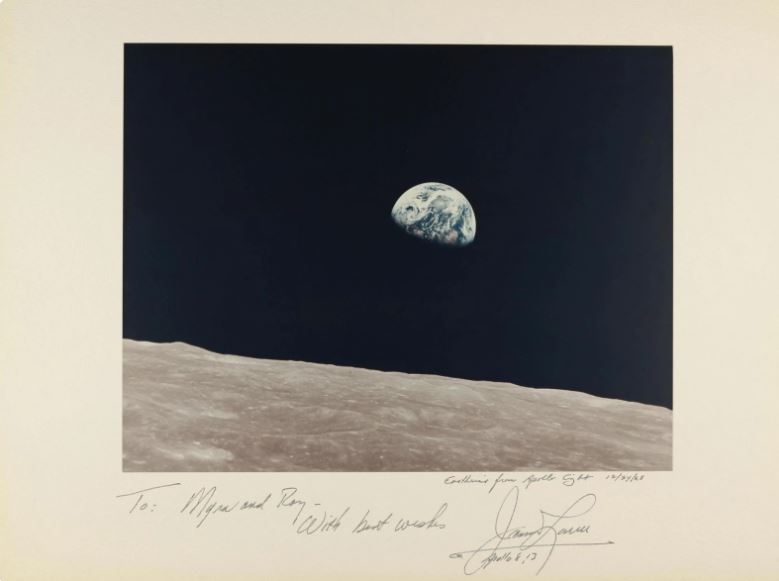 Earthrise as seen from Apollo 8.

20. Earthrise, a photograph taken from Apollo 8 of the earth rising above the horizon of the moon. Apollo 8 was the first mission to go to the moon (it orbited but did not land). Inscribed by James Lovell, one of the three astronauts onboard. $9,300.

16. Paradise Lost by John Milton, published in 1974, three centuries after the first edition by the Bibliophiles of the Automobile Club of France. Huh? Why is this so valuable? Answer – it contains 10 loose illustrations signed and numbered by the artist, Salvador Dali. $12,000.

12. The Earthly Paradise, an epic poem by William Morris, printed in eight volumes 1896-1897 on Morris' Kelmscott Press. Morris first published his poem 30 years earlier, but this edition was printed on his own private press near the end of his life. $13,500.

9 tie. Eleanor Roosevelt letter, to “Harry,” dated February 19, 1944. Calling for equal rights, the First Lady writes, “Something has to happen to people's souls before they are going to give the rights of citizenship to all the people of our country, regardless of color or creed.” It still needs to happen. $15,000.

7. The Bar-Tenders' Guide by Jerry Thomas, a rare 1862 first edition of the first American cocktail recipe book. Thomas was a flamboyant bartender who later opened his own saloon in New York. Not everyone suffered through the Civil War. $20,000.

6. Alice's Adventures in Wonderland, a much later edition (1969) valuable for the same reason as the earlier copy of Paradise Lost – it contains 12 woodcut illustrations signed by Salvador Dali. $21,375.

5. The Sistine Chapel by Vatican Museums, a three-volume elephant folio published in 2020. Pictures selected from among 270,000 photographs taken by two photographers over 65 nights in the Sistine Chapel. This is the new book price. $22,000.

3. Fahrenheit 451 by Ray Bradbury. Not even a temperature of 451 will light this book on fire. This is the famous asbestos-bound edition, which makes it even more dangerous. #83 of 200 signed and numbered copies. $22,500.

2. How to Trade in Stocks by Jesse Livermore, a signed first edition from 1940. Livermore must have mastered his formula, but if it were that easy we'd all be rich. $40,000.

1. I Quattro Libri dell Architettura by Andrea Palladio, a 1570 first edition. Palladio may well be the most influential architect ever, a promoter of classical styles, which have survived all the trends that have since come and gone. $57,750.