Ashley Tisdale Reignites the Controversy Over Books as Decor 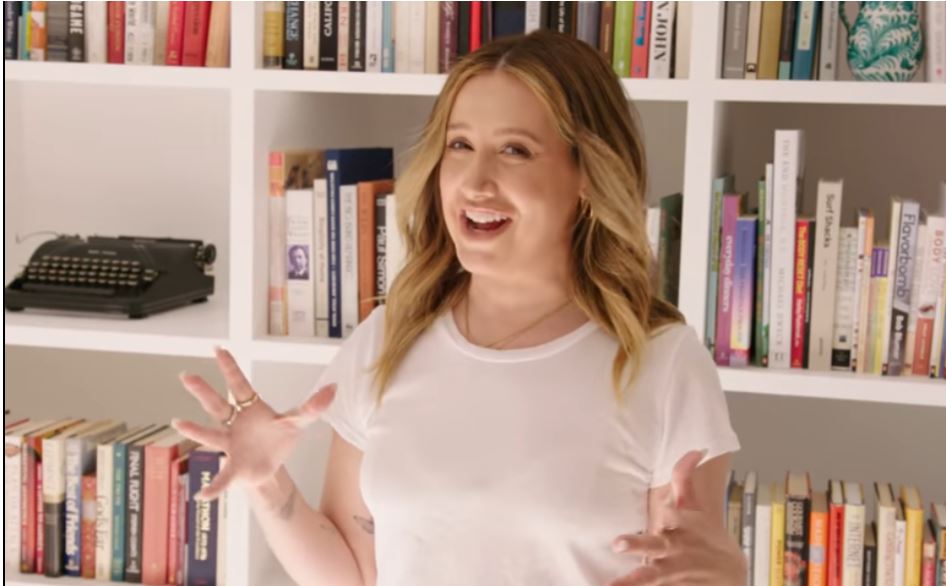 Ashley Tisdale, in front of her books and a typewriter she also doesn't use (from Architectural Digest video).

“These bookshelves, I have to be honest, actually did not have books in it a couple of days ago. I had my husband go to a bookstore. I was like, ‘You need to get 400 books.’ Obviously my husband is like, ‘We should be collecting books over time and putting them in the shelves.’ And I was like, ‘No, no, no, no, not when AD comes.”

And so the argument arises whether books as décor for a video interview is appropriate if you don't actually read any of them. We saw this issue come up many times during the height of the Covid crisis when newsmen would interview various learned men and women in politics and such who would stand before their bookcases for effect. Were they really as well-read and intellectual as they appeared or was it all an act? The concerns faded away because who watches news shows anyway?

This time it is more serious. The culprit was Ashley Tisdale. Ashley Tisdale! First, for a slight diversion - who is Ashley Tisdale anyway? The fact that I even asked that question really gave my age away. She is not the latest flavor. She is 37 years old and hit her stride in the first decade of this century. She had appeared in many movies and did much modeling, but is most known for her role in High School Musical. She parlayed that success into a modestly successful musical career as well. My guess is the old and the very young don't know her, but if you are middle age, at one time in your life you were in love with her. She has 13 million Twitter followers, which is a 13 million more than Walter Cronkite ever had (who?).

Anyway, it was that quote above that stirred up the hornets next. She was doing a home tour video for Architectural Digest (AD) when, in front of her bookshelves, she made that comment. Unlike the talking heads of Covid days, she was totally honest about her books. That was a mistake. The Twitterverse was up in arms. Some were offended, others confused, still others thought Ms. Tisdale was confused. She tweeted back, “Let’s clear this up. There are some of my books from over the years in there but yea 36 shelves that hold 22 books I did not have and any interior designer would have done the same. They do it all the time, I was just honest about it.”

Finally, Tisdale responded to the tweets with some humor: “Sorry I haven't been reading everybody's tweets, I've recently just got a lot of new books to get through.” And then, she came back once more with, “It’s hard to choose from 400 books…”

So, what are we to make of this controversy? First, we should acknowledge that this is not a big deal one way or the other. I read about this between stories about Ukraine. That really puts it in perspective. There is something not quite right about putting on an image that is not real, but this is still a fairly trivial wrong if it is one. Secondly, it reminds me of the Constitution and the Declaration of Independence. Not a whole lot, mind you, but in this way. Those documents are filled with ideals we don't quite live up to, not even the people who wrote them lived up to them. Still, we honor and revere them because we know that is what we should strive to be. We know it is right. Ms. Tisdale is expressing her belief that reading and learning are important goals and values, even if she doesn't do as much of it as she should. It gives me more confidence that books will be around for a long time, even in the time of Twitter, Facebook, and Tik Tok, because people still honor them. What is much worse is when people don't honor these ideals anymore. That is when we could lose our freedom, equal rights, and democracy, along with our books. That is bad. Keep buying your books, Ms. Tisdale, and pull one down every once in awhile and check out what's inside.