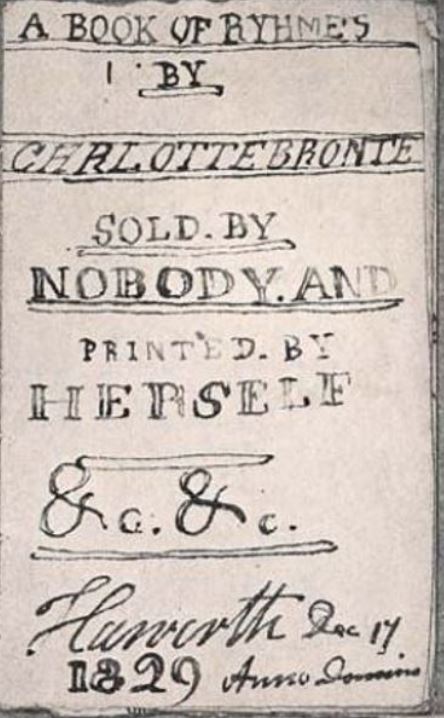 Charlotte Brontë and her sisters have been in the news a lot lately. It's nice to be remembered as they all died over a century and a half ago. It's also interesting to note that the stories have been associated with large sums of money. They are valued both in literary and financial circles today.

Last year, the long disappeared Honresfield Library, missing from public view for 80 years, reappeared when Sotheby's announced they would be selling it at auction. It had been formed by brothers William and Alfred Law in the late 19th century. It contained many things, but the concentration was in Brontë material. The English brothers lived only 20 miles from where the Brontës grew up.

The childless brothers left the library to their nephew, also Alfred Law, but after he too died childless in 1939, its whereabouts was lost to all but a select few, most likely inheriting relatives. It was a mystery until resurfacing in 2021, but where it was remains unknown to those outside of Sotheby's.

After Sotheby's announcement of the planned sale, the Friends of the National Libraries asked to intervene. The Friends' mission is to preserve British heritage, its books and manuscripts in particular. They requested a postponement of the sale so they could have a chance to raise the funds for an outright sale. Sotheby's agreed, with the price set at £15 million (approximately U.S. $20 million). The Friends were successful and the purchase completed late last year. The items were passed around to several institutions including the Brontë Parsonage Museum.

The piece de resistance in the Honresfield collection (along with a manuscript book of poems by Emily) was seven of Charlotte's “little books.” She wrote these in her pre-teen and early teenage years. The sisters would all become famous about two decades later with their first published novels. Sadly, all three died within a few years later. Charlotte's “little books” were handwritten miniature books she wrote to be shared with her sisters, not the outside world.

That left only one of Charlotte's two dozen “little books” still in private hands, but that one had been missing for over a century. It was last seen in a sale at Walpole Galleries, a New York auction house that has been out of business since 1931. That sale took place in 1916 and the book sold for $520. That was a lot of money in 1916.

Then, suddenly, it reappeared. Booksellers James Cummins of New York and Maggs Bros. of London had it. Where they got it we don't know. Owners tend to be secretive. They announced they would be bringing it to the New York International Antiquarian Book Fair last month. It did not take them long to find a buyer. It was the same buyer that bought the Honresfield Library on behalf of the British people. They bought it for $1.25 million, having raised the funds in just two weeks. They have given it to the Brontë Parsonage Museum.

This “little book” is titled Book of Ryhmes (Charlotte's spelling, not mine). They pertain to the sisters' imaginary world, “Glass Town.” Charlotte modestly explained, “The following are attempts at rhyming of an inferior nature it must be acknowledged but they are nevertheless my best.” As the sisters' book of poems, which barely sold any copies until after they became successful novelists, can attest, poetry was not her forté. Fortunately, she turned to prose instead.

Ann Dinsdale, Principal Curator at the Brontë Parsonage Museum said, “We are absolutely thrilled to be the recipients of this extraordinary and unexpected donation and wish to thank the generosity of the Friends of the National Libraries and all of the donors who have made it possible.

“It is always emotional when an item belonging to the Brontë family is returned home and this final little book coming back to the place it was written when it had been thought lost is very special for us.”