Book Fairs: May you live in Interesting Times 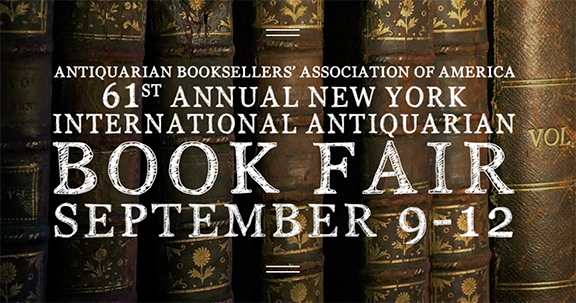 May the force be with you!

Sanford L. Smith + Associates has announced they are preparing for the 61st Annual New York International Antiquarian Book Fair at the New York Armory, September 9 – 12.  They are planning for a flexible number of exhibitors, down from the previous 210, allowing for increased space between booths.  The fair is at capacity under the current guidelines from New York City and the CDC, but as the situation evolves, so will the fair.  SLSA is expected to release the revised show map around mid-August.

SLSA will be closely following all guidelines from the CDC for exhibitors and guests.  For the rare book field personal interaction has long been vital.  Given that as many as 10,000 guests have visited previous New York Book Fairs, managing crowds safely will be the highest priority.  It’s possible the ABAA show in New York City may become an important test case for America.

For SLSA, who have been running shows for decades, with the Covid-19 crisis, the proposed ABAA fair in September may well be an entirely new experience.  Given that the last major trade fair in New York was the ABAA’s event that closed on March 8th, there may well be a strange symmetry if one of the first major fairs re-opening in New York in 2021, would be the same one that brought down the curtains on fairs in New York on March 8th, 2020.

Newspapers, television and cable stations will undoubtedly follow the drama.

And of course, there is another story.  During the Covid-19 period, electronic book fairs have been invented and continuously re-imaged.  These “virtual” fairs are now widely expected to continue and both forms of book fairs will co-exist and mutually assist traditional in-person fairs as they merge in innovative ways.

Let us look ahead with hope.