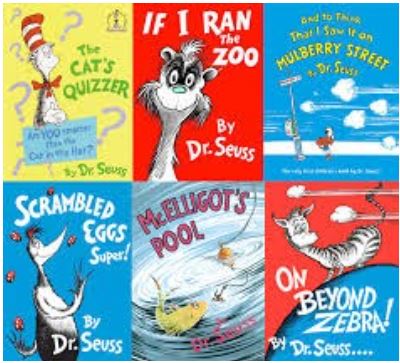 These are the six titles that have been discontinued by the estate of Dr. Seuss.

It was news in February when Hasbro dropped the “Mister” from Mr. Potato Head in a move the company said hoped would make the classic popular toy more “gender neutral.” That announcement caused the internet to perk up its collective ears.

But reaction to the sexual orientation of the aging spud was mild compared to the real pyrotechnics that erupted on March 2nd, when the estate to Dr. Seuss declared it would cease publication and licensing of six titles from the Seussian archives. On the drop-dead list were the time honored classics: To Think That I Saw It on Mulberry Street and If I Ran the Zoo, as well as McElligot’s Pool, On Beyond Zebra!, Scrambled Eggs Super!, and The Cat’s Quizzer.

According to a March 2nd statement issued by Dr. Seuss Enterprises, “These books portray people in ways that are hurtful and wrong.” It went on to say, “Ceasing sales of these books is only part of our commitment and our broader plan to ensure Dr. Seuss Enterprises’s catalog represents and supports all communities and families.”

Well, what exactly was “hurtful and wrong” was a little more difficult to pin down specifically, as was the rationale for ceasing to print the books which already had hundreds of thousands if not millions of copies already circulating through the homes and libraries of the world.

Ostensibly the judgement could be applied to a few illustrations scattered through the text that are small but politically incorrect by today’s standards, but stating unequivocally that such extreme measures were necessary brought forth a wide range of reactions, not all of them siding with the estate’s decision. As the news hit the media, the world of popular culture, children’s literature, bookselling, online auctions, and political correctness all went collectively berserk. There was no one, it seemed, who didn’t weigh in on the decision (including your own correspondent here at Rare Book Hub Monthly).

Now we all understand that books go out-of-print every day with nary the blink of an eye. But when it comes to spectacular exits it will be hard to beat the withdrawal of these six titles by the venerable and beloved author of children’s books, whose claim to fame includes a host of perennial best sellers for youngsters and a masterful command of other genres including advertising, sculpture, and cartooning, to name a few. And when it comes to popular entertainment and collateral merchandise spinoffs, Dr. Seuss is a very heavy hitter (think pajamas, bedsheets and sneakers, t-shirts, toys and games, video and film specials and the whole rainbow of money making opportunities generated by durable intellectual property)

According to Its Linked In profile, Dr. Seuss Enterprises is a San Diego based company established in 1993. The descriptive blurb states its “global portfolio complements the roster of iconic Dr. Seuss books, and includes films, TV shows, stage productions, exhibitions, digital media, licensed merchandise, and other strategic partnerships.”

This is not some small time operation. A recent Forbes article ranked the Seuss’ estate second in value only to the King of Pop - Michael Jackson, in the money making abilities of dead creative celebrities. Or as the magazine wrote, “Sam-I-Am now has a lot more green to go with those eggs and ham. The estate of Theodor Seuss Geisel (better known as Dr. Seuss) nearly doubled its income in 2020, earning an estimated $33 million in a very Grinch-like year.”

The media site Cinemaholic recently estimated Dr. Seuss’s current net worth is approximately $75 million. This article goes on to say, “Since Dr. Seuss Enterprises is growing bigger every year, it is likely that his net worth will soon surpass $100 million. With more and more of his books being adapted into movies and shows, his financial success has clearly only just begun, and we can expect his wealth to be on an upward trajectory in the future as well.”

From a purely business perspective it seemed this was just a routine trimming of the backlist that just coincidentally happened to fall on the author’s birthday and (perhaps unintentionally) sent shock waves through the world of books.

And mighty shock waves they were: only two days later CNN reported that 9 out of 10 books on the Amazon bestseller list were Seuss titles adding, “On eBay, the books are selling for $4,000.”

“One listing on eBay -- five of the six discontinued books for $2,500 -- is averaging 63 views per hour. The discontinued books became rare collectibles almost instantly, simultaneously igniting controversy over the enterprise's decision to cease publishing.”

And, will wonders never cease, it was just a short time later that both Amazon and eBay issued edicts saying they would no longer sell the discontinued titles, (not that there aren’t ways around that ban). But that bit of holier-than-thou sophistry came only after jillions of internet sellers had offered some perfectly ordinary used books of (up till then) very modest value and made some astonishing gains.

Forget “Wall Street Bets”, I personally counted over 70 eBay SOLDS for If I Ran the Zoo that exceeded $100 and one outlier with hardly any description (much less a date) that sold for $720 with 57 bids! (Shades of Popular Delusions and the Madness of Crowds)

So pronounced was the upswing that Emily Hetzel of Common Crow Books, an antiquarian dealer in Pittsburgh, wrote on one of the bookish listservs on March 5, “You may want to take note of an interesting phenomenon: ever since the publishers announced that six Dr. Seuss titles will no longer be published... there has been an enormous uptick in sales of those books on online sites. Cheap book club editions and modern reprints of the six titles, which ordinarily could be found in most used bookstores for $5-10 are now auctioning for $200-400,....We were slow off the mark and quickly sold what we had at pre-"ban" prices. No regrets, I guess.”

“This is an extreme case of how prices can be affected by news or media activity,” she continued. “When movies are made into books, the first editions of those books shoot up in price. When "Titanic" came out, those shoddily printed 1912 rush-jobs on the ship's disaster shot up in price, only to slowly, er, sink over the next years. When an author dies, signed books are snapped up, and even unsigned copies will fly off the shelves, as if the death of an author automatically makes their work a hot commodity: witness how $2 paperbacks of Coney Island of the Mind are still fetching $25 online a few weeks after Ferlinghetti died. One of my favorite books, Atwood's The Handmaid's Tale, used to be about $100 in a signed first edition from Toronto; now it's hard to find one for under $1,000 because: TV.”

A broader discussion of the surge and its impact on the book trade followed in Fine Books Magazine Blog . Among other things it quoted Dr. Philip Nel, distinguished professor of children’s literature at Kansas State University, who said to Esquire about a copy of On Beyond Zebra being offered online for $1,500: “‘Unless that's a signed first edition, I wish them luck. There are so many of these books in print that the imagined scarcity the marketplace seems to be creating is truly imaginary. I imagine some opportunists will manage to make a buck off of this. But if you want a decent used copy of one of these books, they're not scarce.”’

A very different reaction came from the National Coalition Against Censorship which issued its own statement including the comment, “We must draw a line between criticizing texts and purging them. If we remove every book that is offensive to someone, there will be very little left on the shelf.”

Not far behind soaring monetary values and accusations of censorship came the political fallout as the now out-of-print titles brought mostly right wing accusations of “cancel culture.” Some high profile voices decried the actions as an example of applying new (and to them offensive) “politically correct” norms. But, as Chris Volk, of Bookfever.com in Ione, CA noted,” It is ironic that conservatives, who supposedly believe that businesses have the right to make decisions like this, are the ones complaining.”

Or as my dad was fond of saying: “No one ever went broke underestimating the intelligence of the American public.”