The ABAA rethinking the world 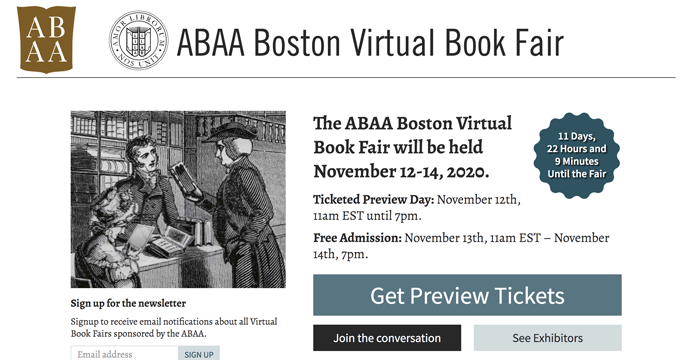 Turning a crisis into opportunity

Susan Benne is the Executive Director of the Antiquarian Booksellers’ Association of America.  A substantial portion of her work normally relates to building awareness of the association’s activities and book fairs in Boston, New York, and one of the alternating west coast cities.   Between the shows and managing member relations, she stays busy.  Twenty-twenty brought with it something else, the appearance in March 2020 of Covid-19, an unusual threat to a show organization.

The ABAA responded quickly with the very new idea of creating on-line book fairs.  And it was done well although the membership opined that the platform could be improved and the rules adjusted.

In September the ABAA’s Virtual Book Fair Committee launched a second fair, a non-public dealer-to-dealer event, to encourage members to try out what will become the next public iteration of the ABAA on-line book fair platform in November: the Boston Virtual Rare Book Fair now scheduled for November 12-14, 2020 at abaa.org/vbf

The event is separately described in another article in an issue under the title The Boston Book Fair Goes Virtual.

And as members are committing to participate, the ABAA is monitoring the process, making improvements, and asking their programmers to adjust in pursuit of perfection.

Then when the doors open on November 12 site traffic will be monitored and adjustments will be made as necessary to assure a successful result.

The ABAA is planning on its next fair, normally held in California, to be virtual as well. It is likely to take place in early March.

It’s now becoming a pattern and as it becomes durable and effective it seems likely when the traditional in-person events begin again the ABAA will be waging them in both forms.