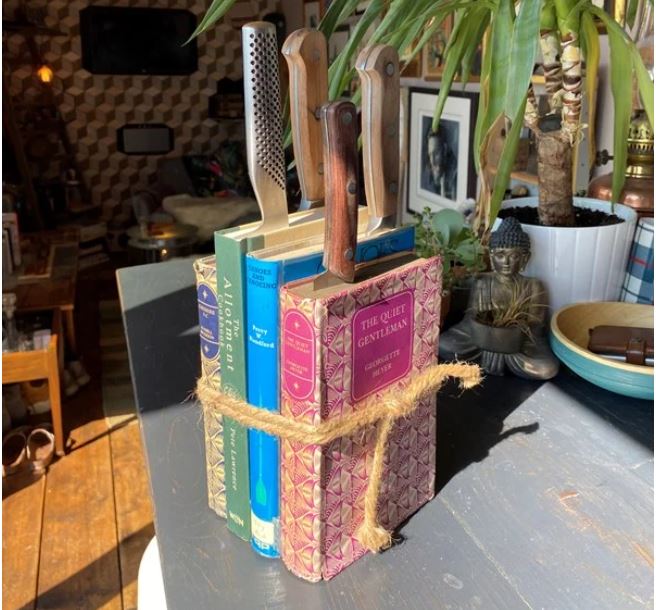 Alternative uses for books have become something of a rage recently. Over the first five centuries of their existence, there weren't many of these. Other than for reading, some books became items for a collection, others beautifully bound to become works of art. That was pretty much it. Now we see such things as “books by the foot” where you can buy random books based on such things as color that will look nice on your shelves. What's inside is irrelevant. You can order books with dust jackets that when placed alongside each other create a design or phrase. Recently, we wrote about a woman who fashions book spines into beautiful dresses. Of course, now lots of people who appear on TV use their books and bookshelves to create an erudite-looking background for their appearances from home.

Now, here is another use. We all know about recycling, but there is an alternative of growing popularity called “upcycling.” Instead of destroying old objects to use their parts or material to create something new, this type of “cycling” refashions the existing objects into something new. You have undoubtedly done this many times without ever having heard of the word. We have all done such things as “upcycling” old bottles to become vases for flowers. They look the same but their use is entirely different.

This latest one comes from Ireland and I'm not entirely sure what they are thinking over there. It was published on the Breaking News site from the Irish Times. The idea comes from Max McMurdo, described as an “eco-designer.” He had three ideas. One was kind of cool. He placed an old ladder in the corner of a room and used the rungs to display various items. Being propped in a corner reduced the chances of knocking it over. This won't work with a ladder with rounded rungs, but this has flat steps. The shortcoming is they are a bit narrow. The second idea was to use some old pallets as garden furniture. He put wheels on them and made some into tables, others, with cushions, to benches. This one seemed more ordinary to me, and probably not that comfortable.

The third involved old books and this one left me scratching my head. He took four old books and tied them together with a piece of sturdy string. This way they can stand on their ends without falling. Then he stabbed four knives into their hearts (see the picture). Huh? That's no way to treat something you love.

Actually, this is not intended to be as violent as it appears. It is meant to be a knife holder. Usually, those things are made of wood, with slots in them for the knives. I can't tell whether there are some precut slots, but since the instructions say simply “Pop your knives in it and place it on your kitchen top,” I would say not. I guess you just jam your knives in there and they cut their own slots. After awhile, I imagine the paper gets somewhat cut up, but maybe it works. Whatever, I still find this one strange. My suggestion is to buy a wooden knife block, put your books on a book shelf, and prop a ladder against a corner wall to display some knick-knacks if you like.