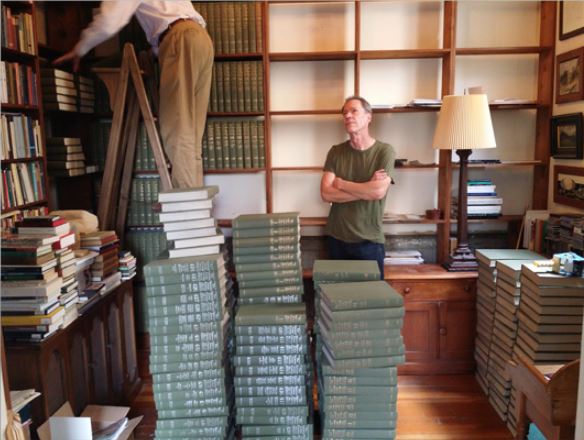 Packing the National Union Catalog. It was shipped on pallets by truck (AbeBooks photo).

AbeBooks has released their list of the Top 10 highest prices paid for books and related material on their website during the first three months of 2020. The items are as different as can be, covering many subjects, styles, and localities/languages. However, the biggest variation is in their size. They go from a single sheet to a set of 754 folio volumes. The single sheet cost three times as much as the 754 volumes. Here is AbeBooks' Top 10 list.

10. A facsimile of the Lindisfarne Gospels. The facsimile was published in 2002, but the original illuminated manuscript dates back to around 800. Lindisfarne is a “holy island” off the northeast coast of England. $8,870.

9. The National Union Catalog (NUC). A reference catalogue of all books in the Library of Congress and some other U.S. libraries published before 1956, this is the largest book ever published. It consists of approximately 12 million listings, in 754 folio volumes, with 530,000 pages, and weighs three tons. Started in 1909, this first and only edition was published in 1968. $9,000 (or $1.50 per pound).

7. The Town and the City, by Jack Kerouac, published in 1950. This is a signed first edition, first printing, published seven years before On The Road. $10,000

4. Moonraker, by Ian Fleming, published in 1955. It's by Ian Fleming. Of course it's expensive. This is a first edition, first impression, in a first state dust jacket of the third James Bond novel. $12,735.

3. The Federalist, by Alexander Hamilton, James Madison and John Jay. Published in 1788, this first collection of previously published individual essays was used to convince Americans to support the adoption of their constitution. $14,000.

2. Alice's Adventures in Wonderland, by Lewis Carroll. This much later edition (1969) is valuable because it is one of 200 copies of an edition illustrated and signed by Salvador Dali. $23,600.

1. Map of Arabia, by Ptolemy. Naturally, this is not from Ptolemy's time, but it is still very old. It is a single sheet taken from the 1482 Ulm Ptolemy, an atlas published in Ulm, Germany. $27,880.