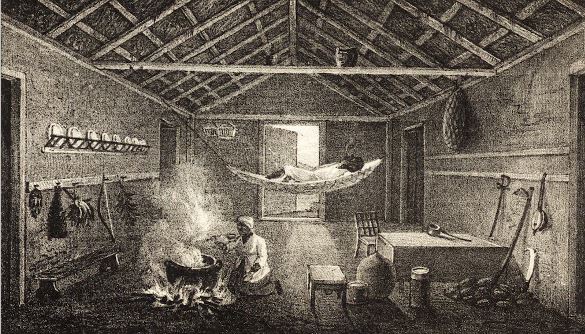 A slave hut—taken from Williams’ book.

As travelling has now become almost impossible due to the Covid-19 pandemic, let’s take a trip across the island of Jamaica in 1823. Meet our guide, Cynric R. Williams! A British subject, he travelled from the Western to the Eastern end of the island, just after the abolition of the trade (1807) and just before the abolition of slavery itself (1838). He thus witnessed the last days of the flourishing sugar colony that had come under fire from the Saints—the abolitionists. As a matter of fact, what may first look like a naive travelogue is actually a strong stand in favour of slavery—but “nuh worry yussef, Massa Buckra (or Bakra, the patois word for a white master)”, slavery in Jamaica was a bed of roses.

Who was Cynrik R. Williams? The presumed author of the first Jamaican Gothic novel ever, Hamel, The Obeah Man (London, 1827). “No further information seems to exist about the person who called himself Cynrick R. Williams,” Janina Nordius notes.* Actually, Hamel... was an anonymous work, but the London Magazine reviewed it in 1828, stating: “The author (...) last year published an amusing Tour in the Island of Jamaica.” There are, indeed, striking similarities in both works. Hamel... is also “the first novel written in or about the West Indies to feature an obeah practitioner as protagonist.” Obeah is the local voodoo. The colonists treated it with Christian contempt, but the slaves believed that it had the power to make them invincible. Actually, it hardly protected them from bullets, but it emboldened them; it was thus of great concern to the planters, especially in the 1820s. At the time, slavery was obviously coming to an end, and the colonists feared a general and bloody uprising—just like in nearby Haiti 25 years earlier.

What did Cynrik R. Williams come to Jamaica for? He doesn’t say. He arrived on December 20, 1823, and then crossed the island with a Negro sidekick, meeting white owners, observing black slaves, crossing dangerous rivers; and then he sailed for England. Actually, his relation is of little interest—he tries to be witty, but he’s mainly pompous and boring; and his observations about slaves or patois will always come second—if not third—to Matthew G. Lewis’, who went to the island around the same period (Journal of a West India Proprietor, 1833). But Jamaica was the epicentre of a hot issue in England: the colony had thrived on sugar—that is to say on slavery. As such, it became the main target of the Saints (abolitionists); “yet few persons, even of those who have taken the greatest share in the disquisitions which it has caused, seem to be at all informed of the general state of society in the West India islands,” Williams notes. All through the book, he acts like a naive idiot, who genuinely reproduces the speeches from fiery slave owners—he even pretends to disagree with them to a certain extent. Yet, his preface is explicit. His little journey put him in the position, he asserts, to tell that “the negro slaves are not worked and flogged alternately, at the option and caprice of their masters, as many good Christians imagine, who have signed petition for emancipating them; that they have their pastimes as well as toils, their pleasures as well as pains; and they smile as often, and laugh as heartily, as the labouring people of this or nay equally happy country.” Yes, Buckra Pangloss, all is well in Jamaica in 1823!

As soon as he landed in Falmouth, he realized that slavery was different from what he had read in abolitionist tracts: “I was surprised so see so many negroes purchasing finery for their approaching holidays.” He saw in them “a politeness of manner,” he had never seen “among the labourers of England,” or the “labouring people of Ireland—poor souls!” What a contrast when he compared the “squalid misery” of the latter “with the comparatively epicurean plenty of the negro slave.” Typical of slave owners: their slaves were happy—happier than poor free people in Europe, anyhow.

What about corporal punishment? British subjects are treated no better in the motherland, the planters retorted. “A few days ago (...) a soldier was flogged to death in London for stealing a silver spoon,” an infuriated Buckra told Williams. “Besides in England and Ireland, they whip the apprentices.” Then he looked his slaves straight in the eyes: “What do you think of those Buckras on the other side of the water? Would you like to be free Britons, free born Englishmen?” No, Massa—of course not. On the contrary, disobedient slaves got away with a gentle admonition and a pat on the back—one day, an “old runaway thief of a watchman reconciled himself to his master.” Was he flogged to pieces? No, Massa Buckra! “He received a gloss of grog in token for forgiveness on the one side, and of repentance on the other; first, that he should not be flogged, and secondly, that he should not runaway any more.” Quartering slaves or burying them alive was, thank God, now forbidden—planters were reasonable people, and those who insisted were duly fined. “In January 1818, Joseph Boyden, a white man, was tried under the Slave Act for cruelly ill treating his slave.” He was sent to prison for six months, Williams says. Justice done!

Anyway, “Mr. Saint”, wasn’t slavery legal? And what good would abolition bring to the slaves—did they want freedom, anyway? Williams met some “emancipated negroes”, and, Lord! What a sad vision: “They said they never had any fish, nor slat, nor corn, nor rice, when the others had;—nothing but the ten pounds.” This money was granted to them but believe me, Massa Buckra, “they would give up the money and their paper: so the attorney would let them be slaves again (...) for they did not prefer to belong to nobody when they were old and ‘ready to dead’.” Not to mention the fact that most planters were on the verge of bankruptcy. Williams met a particular proprietor, who, in his “dear native country, might hope to derive a much larger revenue”—but no, he was fighting against the odds in Jamaica instead. Why? Because of “the intrigues and machination of a set of blind enthusiasts, whose morbid philanthropy propels (...) to measures that injure those they mean to benefit.” Abolitionist Wilberforce and his Saints had it all wrong—the true victims in Jamaica were the planters, not the slaves. And had not Cynric R. Williams been there to testify, we would have never known. Lord ha’ mercy!

The first edition of 1826 was illustrated with 5 plates. We must admit that it was successful, since it was reprinted the same year—with a frontispiece only. But a thorough examination of both editions leads us to think that they could be the same one with different title pages only—a common trick. This political book is interesting, but it must be read carefully. In the wake of global decolonisation of the 1960s, history has been reconsidered, and sometimes rewritten. Slavery became the darkest evil, and many negative cliché were spread—it offered a new vision of the world, different from the one of Williams and his likes. Yet, nowadays, as a part of post-decolonisation history is reconsidered and sometimes rewritten, we realize that slavery was actually more complex than we sometimes imagine. Every black man living in Jamaica wasn’t an abused and miserable enslaved creature, for instance. There are misconceptions on both sides, and this partial book exposes a few of them. Nevertheless, these subtleties should not elude the essential—peoples who have treated slaves like goods they could dispose of at will, have behaved like Barbarians (Diderot). Actually, without casting away collective responsibility, this sentence sounds better with “people” in the singular—the kind Mr Williams met in Jamaica, and to whom he offered a platform with his book. It wasn’t right for him to do so—but Williams was free to do wrong.