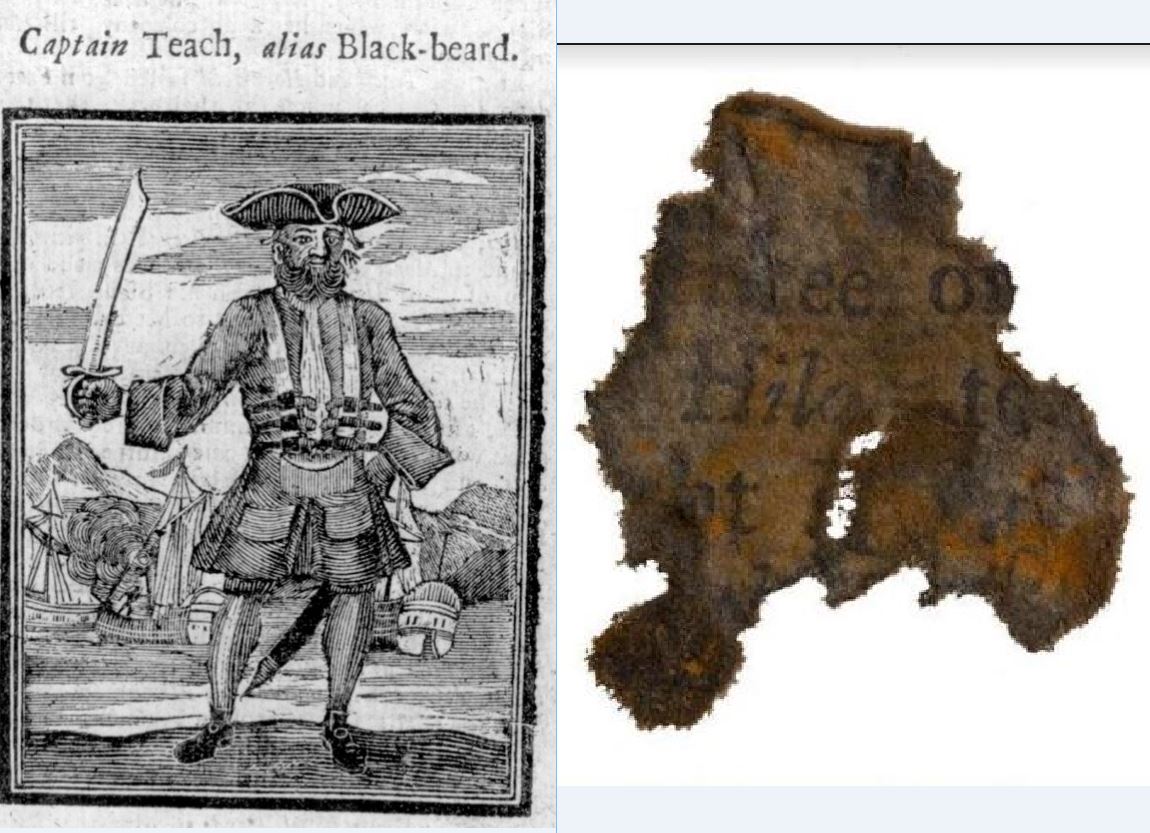 Blackbeard and his book fragment.

Edward ‘Blackbeard’ Teach is one of the most iconic pirates ever. Knowing that fear was his best ally, he fed his own legend with many tricks like tying lit matches to his hat in order to frighten his enemies. A wicked man, for sure—but the perfect romantic character! He was eventually killed in North Carolina in 1718, and his life has inspired many historians and novelists. A recent discovery on the wreck of his legendary ship, the Queen Ann’s Revenge, seems to indicate that Blackbeard was not only living adventures at sea, but was also reading about others on board!

“Edward Teach was a Bristol man born, but had sailed some time out of Jamaica, in privateers, in the late French war,” Daniel Defoe writes in A General History of the Pyrates (London, 1726). “Yet, tho’ he had often distinguished himself for his uncommon boldness and personal courage, he was never raised to any command till he went pyrating, which I think was at the later end of the year 1716 (...). After cleaning on the coast of Virginia, (he) returned to the West Indies, and (...) made prize of a large French Guiney Man. (...) Aboard this Guiney Man, Teach mounted 40 guns, and named her the Queen’s Ann Revenge.” This is the ship he blocked the port of Charles Town, S.C, with; but he was soon forced to run her aground near the city of Beaufort, N.C, a few years before the matches of his hat were snuffed during his last battle on November 22, 1718. The ship remained there for 278 years, before she was finally spotted by a group of independent searchers. It took years before she was officially recognized as being the actual Queen Ann’s Revenge. In 2018, the Queen Ann’s Revenge Conversation Lab retrieved some pieces of paper from the mouth of one of the original 40 guns—probably placed there as a protection. The searchers first deciphered two words on the very small fragments (two-centimetre large), “south” and “phantom”. Then, they read “Hilo”, the name of a city in Peru that led them to the first edition of Cooke’s Voyage To the South Sea and Round the World performed in the Years 1708, 1709, 1710 and 1711 (London, 1712)! This is a very rare and valuable book, richly illustrated, about a famous travel performed under command of another iconic sailor, Woodes Rogers. It tells of a tedious circumnavigation during which they found Alexander Selkirk, who had been marooned (or abandoned) on the island of Juan Fernandez, off the coast of Chili, for four years. His incredible story inspired the novel Robinson Crusoe to Daniel Defoe—Defoe and Rogers were friends.

Relating the discovery of the pieces of paper on the Queen Ann’s Revenge last year, the French website of National Geographic states: “the famous Blackbeard was a keen reader of entertaining stories.” Of course, he wasn’t. Obviously, most members of the crew were illiterate—but ‘officers’ like Blackbeard had to be able to read maps, and we know Blackbeard was writing a journal while at sea. Nonetheless, he probably didn’t read Cooke’s relation to enjoy himself, but rather to get useful information about navigation around America. The pirates and privateers were very interested in these books—and not only to obstruct the mouths of their guns. In the fascinating preface of his Tour du Monde (Amsterdam, 1716 for the French edition), which relates the same Cooke’s travel, Woodes Rogers makes it clear: politics and commerce were at the heart of these expeditions. War was raging—France and England fought each other to get the better of the Spanish kingdom in America. Thus, knowledge meant power. Maps were not a mere matter of having a ‘complete’ or ‘incomplete’ copy of a book, but of accessing to information that could save your life, or make you rich. Thus, the 16 pieces of paper recovered from the mouth of the Queen Ann’s Revenge’s gun are the vestiges of a book that was already valuable at the time. Of course, the condition of this ‘copy’ is not very satisfying: binding gone, title page, plates and all pages missing except a 2-centimetre piece of paper. These defects deeply affect the text, indeed—but could you dream of a more exciting and ‘prestigious’ provenance? From the personal collection of Edward Teach, better known as Blackbeard. Found on board of the Queen Ann’s Revenge. What would a bookseller add? Oh, yeah—very rare!

What makes this discovery extraordinary is the fact that it completes a terrible puzzle. Blackbeard reading the relation of a privateer is already quite pleasing. But the author of this book rescued the man who inspired Robinson Crusoe, a novel written by the same author who later wrote Blackbeard’s life! Furthermore, Cooke was then sailing alongside Woodes Rogers, sent to the West Indies after the Queen Ann’s, not revenge, but war (1702-1713), to eradicate piracy—which he did. Blackbeard probably read Cooke’s relation before he stuffed one of his guns with it, indeed—but it was rather to kill some Spaniards than to merely kill time.