The Price of Imperfection is Going Up 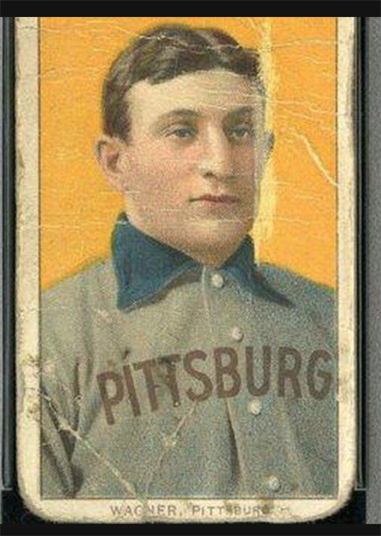 Honus Wagner, a well known baseball player in his lifetime, has achieved in death increasing notoriety in his afterlife.  True, in life he was good, even very good, played 21 seasons, won 8 batting titles, and was one of the 5 original players inducted into the Baseball Hall of Fame, his votes a few behind Ty Cobb and tied with that New York guy, what’s his name, the Babe, Babe Ruth.

But in the then budding business of baseball cards he is outshining them all as is evidenced by the $1.2 million price paid for a Good 2 Condition copy, the equivalent in the book business of “but for the missing title page, a complete book."

SCP Auctions, who made the sale, says it’s “a truly remarkable amount” for a card rated as Good 2 condition. He says it’s “only a matter of time” before any graded card in even lower condition will bring $1 million.”

Wagner, who was a shortstop for the Pittsburgh Pirates early in the 20th century, is believed to have disliked that his image was associated with tobacco, thus causing the production of his card by American Tobacco to be quickly cancelled.  This then caused the rarity of it.

As a result, only a few dozen examples are known to exist and only six of them have been graded higher than the one recently sold.