University of South Carolina Receives a Gift of Over 180,000 Comics 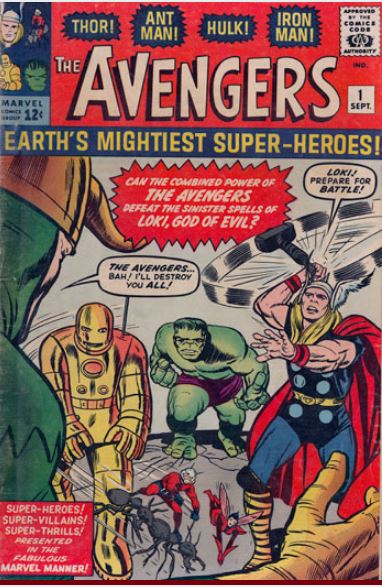 The Avengers #1 (from the University of South Carolina website).

Remember when your mother said you would never learn anything by reading comic books? The folks at the University of South Carolina don't. When they heard a collector from Ohio had an enormous collection of comic books and related material he wanted to donate to a good home, they jumped at the opportunity. It has since made it to the the university's library, hundreds of boxes weighing 40,000 pounds, requiring two 26-foot long truckloads to haul.

The collection contains an estimated 180,000-plus items. No one knows for sure. It's all in boxes which will take years to sort. It includes around 143,000 unique comics, 20,000 magazines, 15,000 paperbacks, and 5,000 pulp books. The collector was Gary Lee Watson of Columbus, and he obviously dedicated much of his life to building this collection. Indeed, if he purchased one item every day, he would have to be 501 years old. He is not. He is only 69, and has been collecting since he was eight. So, it means he has been collecting, on average, a little over eight items a day for the past 61 years. One might even go so far to say he was a bit obsessive with his collecting. The University of South Carolina does not mind.

The collection includes comics through the entire time spectrum of their existence. They go from the Platinum Age (1897-1938) when comic books often were compilations of newspaper strips, to the Golden Age (1938-1950) when many superheroes were born, through the Silver Age, Bronze Age, and Modern Age. Comic books evidently have their own archaeology. Among the comics in the collection are the Avengers #1, Star Trek #1, and the Brave and the Bold #28, featuring the first appearance of the Justice League. While all your favorite superheroes, Superman, Batman, Wonder Woman, the Hulk, etc., are to be found, there are also some early characters such as Mutt and Jeff from the beginning of the twentieth century. Those were the days when comics were actually comical. Undoubtedly, there are many as yet unidentified titles hidden away in all of those boxes.

An estimated value has been placed on the collection of $2.5 million. That must be a bit of guesswork since what exactly is there will take time to sort out. Mr. Watson, naturally enough, has no idea how much he spent on acquiring it all over the years. Perhaps the better question than "how much?" is "why?"

Associate Dean for Special Collections at the South Carolina University Libraries Elizabeth Sudduth is quoted on the university's website as saying, "This is a new direction for us, but this is precisely what special collections are really all about." She also described it as "a phenomenal, transformational gift." That it is, and the library better be prepared for some transformations. This will not be an easy gift to handle. At a time when many libraries are struggling with how to manage their rare book collections, which see limited traffic, particularly in an age when so much material is now available digitally, the South Carolina library is taking on 183,000 more items of paper. The amount of cataloguing will be enormous, the storage space something like two 26-foot long truckloads worth, and preservation of old material is never easy or cheap. Space demands, climate control, security, etc. are taxing, and most of this material was printed on cheap paper, not the easiest to preserve. They have their work cut out for them.

We finish with a concluding comment from Ms. Sudduth - "Comics are universal. Whether you read them as a child, have a favorite superhero or your mother threw out your collection when you went to college — everyone has a comics story." Now we finally learn the truth about your mother. She didn't throw out your comics after all. She sold them to Mr. Watson. And, there's not a thing you can do about it now.