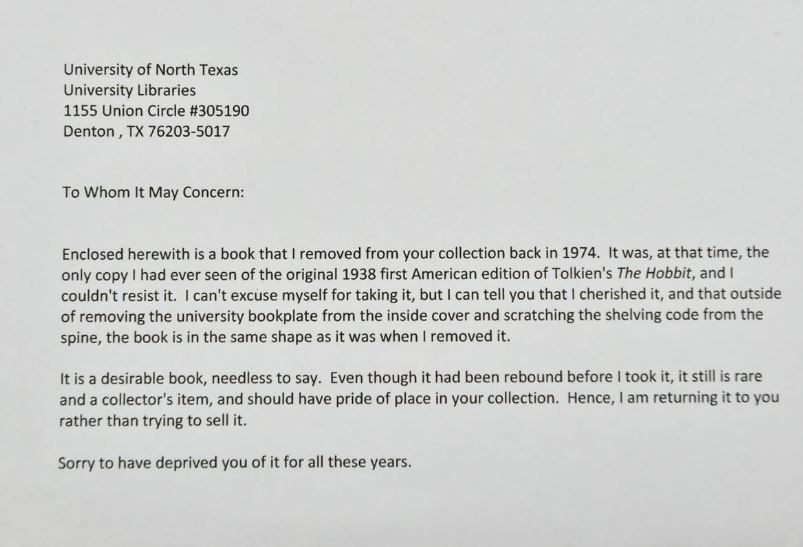 Note received by the University of North Texas with its returned copy of The Hobbit.

It took almost 50 years and a guilty conscience, but a couple of first American editions of J. R. R. Tolkien books have made their way back to the university libraries from which they were stolen nearly half a century ago. The anonymous thief, who apparently has been identified, won't be sent to prison, nor banishment to Middle-earth. The libraries are forgiving, just happy to have their books back. One even noted there won't be any overdue book fine since they were stolen, not borrowed. A technicality, for sure, but technicalities make fine get-out-of-jail free cards. Here is the story.

Last month, Oklahoma Baptist University in Shawnee, Oklahoma, received a copy of the first American editions of the Lord of the Rings trilogy. They were stolen from the university, though it wasn't immediately obvious. Fortunately, the sender was kind enough to provide an identification. A note was enclosed saying they had been taken from the university library in 1972.

Meanwhile, 160 miles to the south, a similar package arrived at the University of North Texas in Denton, Texas. It contained a first U. S. edition of The Hobbit. It, too, contained a note from the person who took it. In this case, the book had been stolen in 1974 (the writer used the term "removed"). The note explained, "It was, at that time, the only copy I had ever seen of the original 1938 first American edition of Tolkien's The Hobbit, and I couldn't resist it. I can't excuse myself for taking it, but I can tell you that I treasured it, and that outside of removing the university bookplate from the inside cover and scratching the shelving code from the spine, the book is in the same shape as it was when removed." The "remover" continued that the book should have a "pride of place in your collection. Hence, I am returning it to you rather than trying to sell it." The note concluded, "Sorry to have deprived you of it for all these years."

The books are of some value, though not the most collectible of copies of what might otherwise be very valuable. The Lord of the Rings trilogy are first editions, but 11th printings. The first edition of The Hobbit is a first issue, but lacks the original cover, maps in front, and dust jacket. The Head of Special Collections at North Texas estimated the value of their copy of The Hobbit to be $800-$1,000, vs. $10,000-$15,000 if complete. These estimates may be a bit generous, but the value point is well taken.

Apparently, the identity of the thief is known. It was determined through other borrowings at Oklahoma Baptist of Tolkien books by a student years ago. However, no attempt at retribution is being made. Instead, the libraries are grateful the thief had a change of heart all these years later. It is a story of redemption, not retribution. One imagines the student was taught certain theological basics, such as "Thou Shalt Not Steal," at Oklahoma Baptist University. That student may have been a slow learner, but at long last, the lesson has sunken in. Let the lesson be, it is never too late.