Newseum Soon to be in the Past Tense 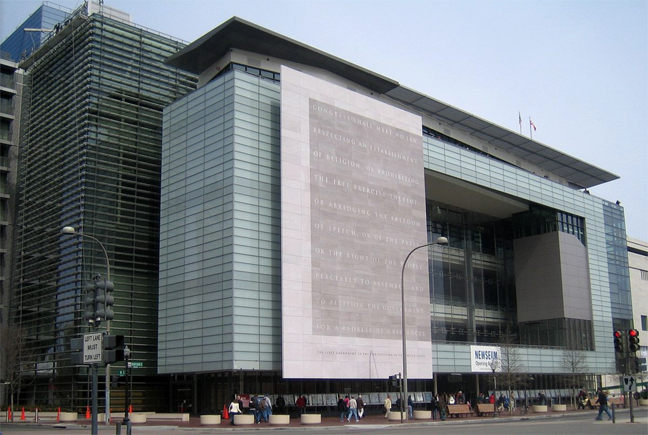 We are caught in that particular moment when old men, remembering their dreams, pay homage to them.  In some cases they remember a past no longer anchored in the present.  As a case in point, the Gannett newspaper organization which achieved both wealth and power through the ownership of daily newspapers in the United States in the 20th century, leveraged that success into, among other things, the Newseum, a homage to the printed word in Washington D. C.   It was a splendid, if dated idea, that would have held crowds in thrall in the 1930’s but has rapidly lost ground to the internet, news feeds, and instant messaging.  Of course, it’s not the museum located In Washington D. C. that fell behind, it’s the present that is racing ahead.  So here’s a note to the future.  Museums should focus on the future to anticipate what we will end up living through.  Had the Newseum done that they might have survived.

Their end could have been worse.

The New York Times had a story in its west coast edition on Saturday January 26th that both announced the sale and sought to explain it in which it came down to this:  insufficient attendance and rising real estate values.  It turns out the real estate market is going to bail out the Gannett Foundation [now called the Freedom Forum] and the building will go to one of the few enterprises that has control over its retail prices:  higher education.  Johns Hopkins, the great Baltimore university, is buying a beachhead in the nation’s capital.

Many in the world of rare books, manuscripts, maps and ephemera will recognize the symptoms:  declining audiences, higher costs, and changing methods of interaction.  Collectible paper faces many of the same issues.  My take away:  explain your material in ways that illuminate the future so you won’t be relegated to the past.  Yesterday’s news has become a hard sell.

In time the Newseum will become an entirely electronic institution, live online, see its attendance soar and its archives quoted every day around the world.  We now have to fit into an evolving world because that world increasingly does not remember us, even if the building is pristine and the location at the nexus of power.