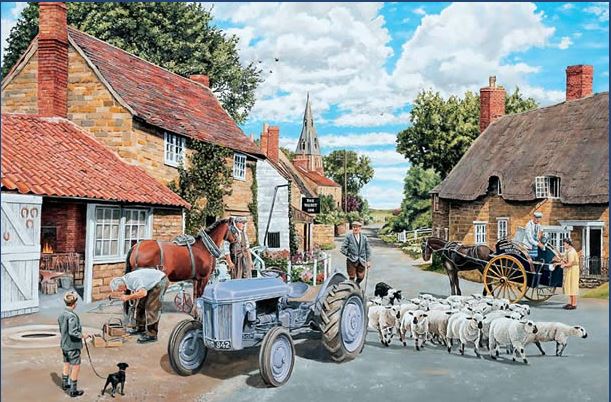 Salmon's postcards were an over 100-year-old tradition.

It is another sign of the changing of the guard in terms of print versus electronic media. Britain's oldest postcard publisher is closing its doors after over a century in business. J. Salmon opened as a general printer in the 1880s, and by the turn of the century was publishing postcards and calendars. It has continued ever since, a family business now run by the fifth generation. Soon it will publish no more. Printing will stop by the end of the year and the business will wind down in 2018.

Charles Salmon, 61, who runs the operation with his 56-year-old brother, Henry, cited changing technology as a major reason for their closure. The fact is people no longer send postcards nearly as often as they once did. Email and social media, which have had a similar affect on the writing of traditional letters, has done postcards in. Salmon is not the world's only postcard publisher and you will still be able to buy them, but seriously, how many people still send postcards?

In my youth, our family used to receive them regularly. It was a rite of travel that you send them back to family and friends not so fortunate as you. "Wish you were here." But, of course, you weren't. Too bad. It is a rarity to receive one today, and usually it comes from someone who wants to convey a short message, rather than a traveler, and it is someone whom your and my children would describe as an "old person." I doubt that any of my children have ever sent one, and the few they have received came from "old people" of my generation or older.

Reportedly, sales at Salmon have dropped from a peak of about £20 million 25 years ago to £5 million today. Charles noted that another reason for closing is that no one in the next generation has expressed an interest in continuing the family business, and with results like that, it isn't hard to see why. When you can post pictures of your trip on Facebook, Instagram, YouTube or wherever, and send personal messages via email or the various instant messaging services, who needs postcards? Just a few nostalgic old people, I guess.

Ironically, there is an area where postcards do still seem to be alive and well – collecting. As print collectors have expanded their focus to include more ephemeral items, postcards have become more popular. They provide an excellent window on their times, old pictures with a personal message. They were sort of an earlier generation's Twitter, just enough room for a short message, but with the addition of a picture. There was enough room for about 140 characters before that small one-quarter of the card on which you could write your message was filled. We just didn't know to call them a "tweet" then.

Salmon's other product, the calendar, is also collectible today when it features desirable illustrations. My guess is the calendar for sale business is suffering too, a victim of the free one. Maybe merchants no longer hand them out, but my mailbox becomes more laden with them every year, evidently an inexpensive promotion by charities seeking a contribution. I kid you not – I got my first free calendar for 2018 last May, and a couple more before summer was over. I suspect each was trying to be the first to deliver a new calendar, thinking that would give them a heads up in eliciting my donation. I may not be curing disease, helping the poor, or saving the environment with my contributions, but at least I am helping the cause of printing more calendars so they can ship one to my neighbors too.