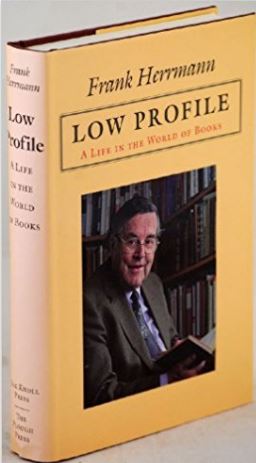 Frank Herrmann, writer, publisher and auctioneer died at his home In Essex on Sunday, a month short of his 90th birthday, following a long battle with illness.

After a distinguished career in publishing with Faber & Faber, Methuen’s and Ward Lock, and having himself written the Giant Alexander books as well as the acclaimed The English as Collectors, Herrmann entered the world of antiquarian books when he joined Sotheby’s to reorganise their book department soon after the publication of his Sotheby’s: Portrait of an Auction House, in 1980, following 4 years of secondment to the auction house to research its history. With an outsider’s eye and with teutonic efficiency (German by birth, his parents had fled Nazi Germany to settle in England in 1937) Frank introduced “Fast Sales” to clear the backlog of consignments – he reduced the waiting time from consignment to sale date from some 14 months to 4 weeks. He soon became head of Sotheby’s Overseas Operations outside the UK and America, a role he relished for 3 years. When Sotheby’s decided in 1983 to raise the threshold for consignments to £500, Frank saw an opportunity to create a new auction house, similar to the late lamented Hodgson’s of Chancery Lane. In cahoots with Lord John Kerr (former head of Sotheby’s Book department) and David Stagg, the dynamic force behind Hodgson’s and latterly the Sotheby’s Fast Sales, he founded Bloomsbury Book Auctions, which Geraldine Norman of the Times heralded at the time as the first specialist book auction house to open in London in 100 years.

Kerr, Herrmann and Stagg were an unlikely triumvirate but mightily complementary and effective, with BBA rapidly becoming a major force in the rare book world. Lord John was the quiet figure-head, highly respected throughout the trade and with a remarkable breadth and depth of knowledge; Stagg was the livewire – tall, devastatingly good-looking, charming and infectiously enthusiastic. Both were brilliant auctioneers. Frank was the financial and strategic brain behind the whole enterprise: gentle, unflappable, visionary but also with an extraordinary eye for detail (the design and layout of the orange catalogues, down to the font size, were one of his particular focuses). One journalist described him as an “affable Maecenas”. Generous with his time, encyclopaedic knowledge of the book and art world, in business Frank was naturally cautious with money, always had a financial “buffer” and seldom, if ever, had to go to the bank for an overdraft. He was a gifted and prolific writer of articles (but had almost illegible hand-writing!); he loved to entertain friends and colleagues at the Travellers’ Club, at Double Crown Club dinners and, if you brought an object to show others and on which you could elucidate, at the Society of Antiquaries.  He was immensely proud of his beloved wife Patricia, their four children and his and their successes. Amongst a host of triumphant sales at Bloomsbury, consigned directly as a result of Frank’s standing in the book world (Ralph and Phylis Yablon; Wynne Jeudwine; Curwen Studio archive to name but a few) one of his own particular favourites was the private treaty sale of the working library of Graham Greene, which he single-handedly negotiated with Boston College in Connecticut for nigh on $1m, the collection having dismissively been valued by a well-established and respected specialist modern literature firm in London at a mere £30,000. He loved that story!

He was scrupulously fair, honest and ran his auction house with the utmost integrity. He made work both fun and fascinating. When he finally retired in 2002, shortly after he and Lord John (who were almost exactly the same age) could boast a combined age of 150, Frank continued to take avid interest in the book world and Bloomsbury, then latterly Forum, in particular. He loved receiving the catalogues and right up until the last few weeks was delighted to hear news and give his thoughts on recent auctions, and especially reminisce about how much copies of books reported in that week’s ATG had fetched back in the mid-80s.

Numerous current members of the book trade began their careers or passed through the Bloomsbury portals over the years, where we learnt directly or by a form of bibliophilic osmosis from Frank. Of course, it is the majority of the current team at Forum Auctions who have most to thank Frank for and his business ethos lives on in all they do. With a resounding ironic echo of events some 30 years earlier, most of them left Bloomsbury in 2016 to join the new books and works on paper specialists (double-irony, founded by another German, Stephan Ludwig). Rupert Powell, Dido Arthur and Justin Phillips were all given their very first jobs by Frank - Dido was initially given the task of systematically arranging his vast private collection of Sotheby’s catalogues. Those who also fell directly under his aegis or were employed by Bloomsbury at some point in its history include: Simon Luterbacher (Liss Books); Luke Batterham and Simon Roberts (Bonham’s); Clare Trimming (Beaux Books); Ian Kidman (Ian Kidman Rare Books); Angus Robb and soon to be joined by Roddy Newlands (Bernard Shapero Rare Books); John Collins (Rosebery’s); Steve Cain (Maggs Bros.) and in the US, Jeremy Markowitz (Donald Heald Rare Books); Richard Austin (Sotheby’s NY); Tom Lamb (Bonham’s); Pete Costanzo (Doyle’s); James Cummins III (James Cummins Rare Books)…and many more.

Frank Herrmann’s legacy is truly alive and thriving throughout the rare book world. We will all miss him dearly but he can now rest in peace.