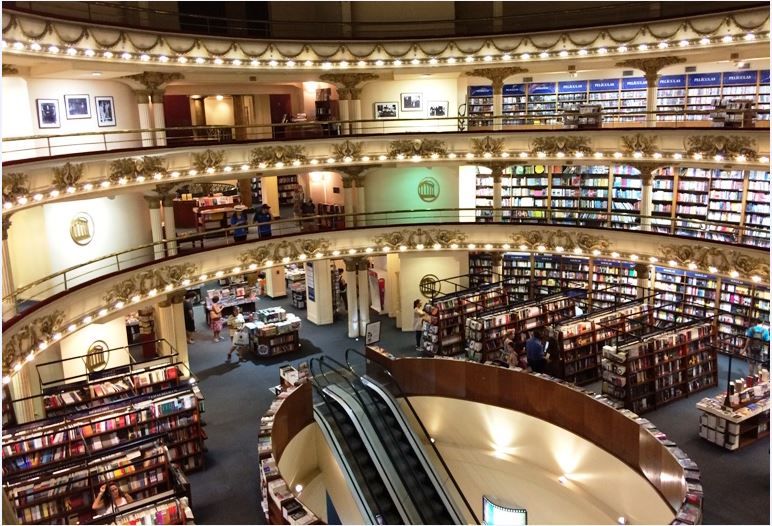 Libros del Pasaje was very interesting. They had lots of books, some of which were in English. They had a nice little café and bar at the back of the store and rolling ladders to reach the high book shelves. They are open late and very helpful. I didn’t buy anything there as I had already reached my limit for the day. One of the things we most appreciated about South American restaurants and bars is that they don’t hurry you up. You can sit at your table all afternoon or evening sipping their excellent wines or not-so-excellent coffee, talking among friends, reading a book or newspaper, and nobody glowers threateningly.

When we were in Portugal several years ago, we went to Lello’s, the purported “most beautiful bookstore in the world”, and I have to agree, it was incredible. But then we went to El Ateneo in Buenos Aires and it gave Lello’s a run for its money. It reminded me a little of Powell’s in Portland, only in a more grand setting. It was built in 1919, designed for the Emperor Max Glucksmann (1875-1946). Most of Buenos Aires top stars such as Enrico Caruso and the very famous “father of Tango,” Carlos Gardel, performed there. It later became a radio station and often featured celebrity tango singers. It closed for a number of years until it was rescued and became the second most beautiful bookstore in the world (in my humble opinion and theirs too). It is called the “Grand Splendid”, and it is aptly named. It’s in a grand old historic theater three stories high and packed with splendid new books. Most were in Spanish. The stage has become a coffee shop with yummy lemon squares and there are box seats, nooks, and crannies all over the place where one can sit in big overstuffed chairs to read for as long as one wishes to. My photos don’t begin to show the glamour of this joint, so go to www.boredpanda.com/buenos-aires-bookstore-theatre-el-ateneo-grand-splendid and feast your eyes. I wanted to just lie down on the floor and stare up at the incredible artwork on the ceilings. Michelangelo would have felt right at home. I bought tango bookmarks with beautiful, leggy tango ladies on them for my male partners in our book co-op. The ladies got penguin paraphernalia from the Falklands. I also found a set of gorgeous Spanish Tarot Cards for my Spanish speaking customers. They will treasure them, knowing they came from Argentina.