The Worst Kind of Library Theft 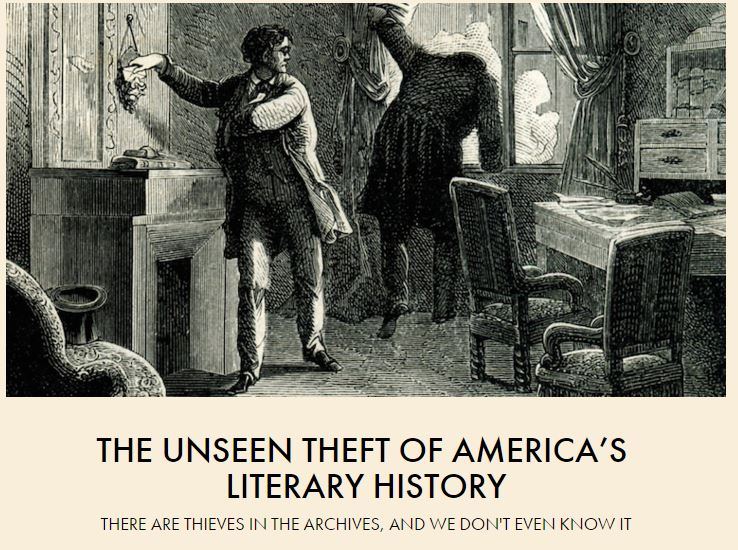 The folks at the Literary Hub have informed us of an article they have published they believe will be of interest to readers of Rare Book Monthly. The Literary Hub is filled with articles about books and literature, but this one particularly hits home for those interested in the antiquarian and rare part of the trade. It deals with an issue of both historic and current concern, every librarian's worst nightmare.

In October of 1990, David Breithaupt was hired to the position of night supervisor at the Kenyon College Library in Gambier, Ohio. The library at Kenyon College is not an ordinary library in literary circles, as Kenyon College is home to the highly respected Kenyon Review. Many American and foreign writers' works have made their way to the pages of the Kenyon Review. This means the Review has all sorts of correspondence and other documents pertaining to some of the great writers of the twentieth century in their archives. This material is housed at the Kenyon Library.

At some point during his tenure, Mr. Breithaupt began supplementing his income with items that belonged to the library. However, it wasn't until eight years into his term that he discovered the most valuable material, nondescript looking folders filled with letters and such housed in the rare book stacks. He then began convincing nighttime janitors to let him in, whereupon he would exit with more than he entered. He would take the valuable material home and post at least some of it for sale on eBay. The material was priceless, but if Mr. Breithaupt picked up a few hundred or thousand bucks, that was sufficient considering his absence of any cost.

As frequently happens when greed leads to more and more theft, one day in 2000 he got caught. The head librarian at Georgia College and State University, located near the hometown of author Flannery O'Connor, found a letter of hers for sale too good to be true. He did some poking around and discovered it really belonged to Kenyon. A phone call followed, and you can guess the rest.

The article appearing in the Literary Hub is titled The Unseen Theft of America's Literary History, by Travis McDade, who is an authority on the unhappy subject of literary thefts. This case may go back to the 1990's, but, sadly, it is no less topical today. We have seen everything lately from the possible theft of a valuable print at the Boston Public Library that turned out to be a case of misfiling, to the enormous theft of valuable books from the Girolamini Library in Italy. However, the Kenyon theft was particularly insidious. As Mr. McDade points out, while valuable books in libraries almost always are referenced in some files, so at some point they will be known to be missing, much ephemeral material, such as some of the items at the Kenyon Library, are not adequately referenced. The stuff could disappear, and no one would know the difference. If this type of material disappears, no one will know it ever existed. History is lost.

Mr. McDade's fascinating article can be found at the following link: lithub.com/the-unseen-theft-of-americas-literary-history