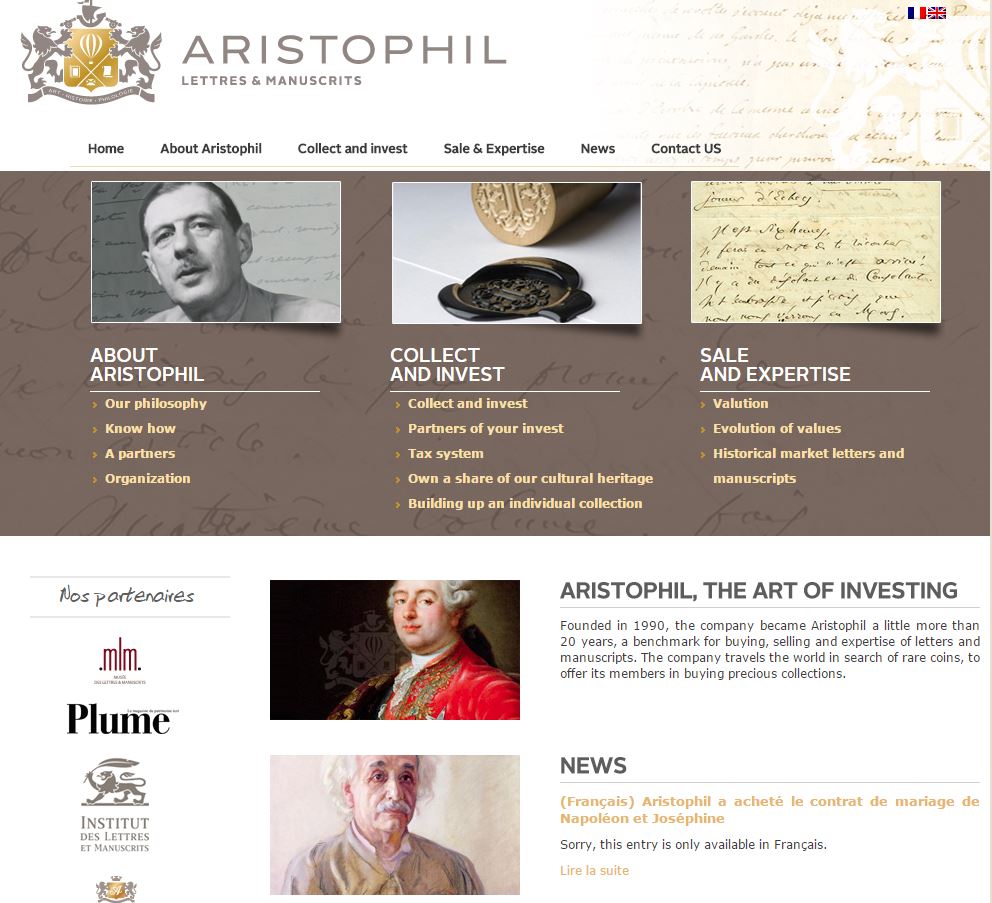 The owner of an incredible manuscript business has been arrested in France, following the shuttering of his business earlier amid claims that it was a Pyramid (Ponzi) Scheme. The name “Madoff” has been bandied about frequently by the press in connection with the case. The business' operator, Gérard Lhéritier, has vehemently denied the charges.

Lhéritier's business, Aristophil, has amassed a manuscript collection almost beyond comprehension. It is claimed to contain around 135,000 manuscripts, housed in storage and in museums in France and Belgium (now closed). It included the will of King Louis XVI, written just before his unsuccessful attempt to flee Paris, André Breton's surrealist manifesto, a large collection of Charles de Gaulle's wartime telegraph drafts, Napoleon's marriage certificate, Albert Einstein's writings while working on the Theory of Relativity. Other names contained in this massive collection include Voltaire, Goethe, Descartes, Tolstoy, Zola, Verne, Mozart, Beethoven, Newton, Pasteur, Edison, Eiffel, seven more French kings besides Louis XVI, Gandhi, Churchill, Franklin Roosevelt, and many, many more. Recently, the firm had purchased the Marquis de Sade's 120 Days of Sodom, the manuscript written while he was imprisoned in the Bastille, for €7 million (pushing US $10 million at the time).

The issue was how Lhéritier was financing his purchases. He sold interests in pools of manuscripts to investors. With the use of their money, he would buy at auction, from dealers, or privately. The problem was compounded by his buying at high prices. Some appraisers believed he was way overpaying. However, in so doing, and buying so much, he drove the prices up. This created the appearance of sharply rising prices and values in the field, which reassured investors of the wisdom of their investments and encouraged newcomers to join the party.

It has been alleged that Lhéritier promised investors an annual return of at least 8% for a five-year investment. Lhéritier has denied this, and apparently it was not in writing, but at least some investors evidently believed the return was guaranteed. When an investor wanted out, their shares would be repurchased at a healthy gain, again encouraging others to invest. Of course, this is also a basic attribute of a Ponzi scheme.

Lhéritier opened Aristophil in 1990, but it was not until the beginning of the new century that the business began to grow into a manuscript behemoth. It then expanded from a few hundred to many thousands of investors and opened its manuscript museums. The current collection was estimated to be worth something in the €500-800 million range, which at the top end could be approaching almost $1 billion. However, this may be a largely inflated value, based on Lhéritier's purchases or estimates. It does appear that cash investments made in the business are in the $1 billion range.

In November, a large contingent of officers from France's anti-fraud squad raided the company's headquarters, along with offices in Brussels and Luxembourg, the Paris and Brussels museums, Lhéritier's home, his accountant, several investment advisors, and the office of a bookseller who sold Lhéritier many manuscripts. The business and its assets were all seized, forcing it to close down. Lhéritier objected that he was being forced into bankruptcy without a trial, but the anti-fraud investigators evidently felt the case was such that they needed to act decisively to protect the investors' interests. Aristophil's employees, around 65, were laid off. The firm's website was also shut down.

In early March, the long-delayed but inevitable other shoe dropped. Gérard Lhéritier was indicted on suspicion of fraud. His daughter, who managed the collections, and a couple of others were indicted too. The claim is essentially based on what investigators believe is a huge difference in the value of the firm's assets and its declared value. Not surprisingly, investors are upset, some having invested large portions of their savings with Aristophil. If it turns out the assets are worth just a fraction of their declared value, their losses will be substantial, for many life-changing. Even if estimates weren't grossly exaggerated (and the state believes they were), prices were driven up by Aristophil's buying. Selling this material without Lhéritier setting the market is likely to result in significantly reduced prices. Add to that trying to sell these manuscripts in volume and the nature of the mess becomes painfully obvious.