Solid, If Somewhat Surprising Results at the Chelsea Book Fair 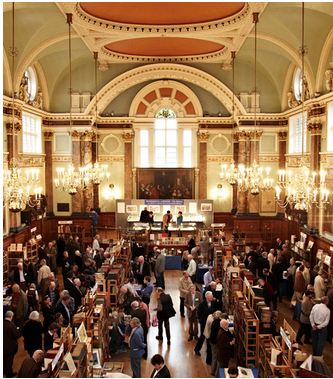 The promoters of the Chelsea Book Fair in London last month report that it was a busy event, with sales up for most participants. However, total sales were down, somewhat of an anomaly, and something of a contrary indicator from results we have seen at auction. The fair's chairman offered an explanation for these moderately surprising numbers.


However, there was a surprising divergence between the average sale and the median sale. The average was down, the median up. The median is the point at which half of the booksellers did more in sales, half less. That figure was £3,325 ($5,280), an increase of 12% over last year. On the other hand, the average in sales per dealer was £4,438 ($7,050), a decrease of 10%. What gives?


It appears that sales must have declined at the top end of the market. It is the very expensive items that drive the average sales price up. More sales, particularly in the middle of the market, drives up the median price. Evidently, what was happening was that fewer people were making purchases of very expensive books, but more were buying mid-priced books. This runs contrary to what we have generally been seeing at auction – prices continuing to be robust at the higher end of the market, but sales slower in the middle.


Fair Chairman Leo Cadogan offered his assessment of a possible explanation: “This year’s sales proved that the top end of the market is more volatile at small to medium book fairs, and big sales do not always conclude on the fair day. However, we understand that a major sale might be closed later in the month. It was gratifying that the mid-end of the market, seen to be under the greatest stress at the moment, did so well.”


The fair organizers reported that comments from exhibitors were “overwhelmingly favorable.” This is logical since higher median sales most likely means that the typical bookseller saw increased sales this year, even if those selling the most expensive books saw some drop off at the high end. All things considered, this is an excellent result. Everyone is well aware of the current economic climate, and particularly in Europe, where even the major economies now risk falling back into recession. The book trade has taken its share of hits over the past few years. It is most welcome to hear some good news coming out of Chelsea.