Selling History - Moving on Down the Highway 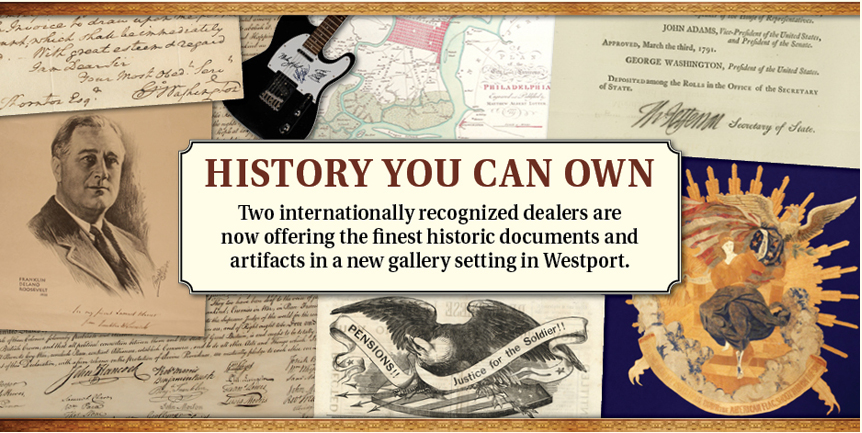 Jim Croce said or perhaps I should say sang “Movin’ me down the highway” in 1973 and we have been hearing it ever since on radios and in elevators.  Seth Kaller and John Reznikoff got the message and heard something in the song most other booksellers have not.   Many, and its probably a safe assumption most, booksellers have been closing shops.  Seth of Seth Kaller, Inc. Historical Autographs and John Reznikoff of University Archives have partnered with Stephen Rockwell [he’s a distant relative of Norman] Desloge, owner of six Rockwell Galleries in Fairfield County, Connecticut. They are converting one of the galleries into a mixed media shop in Westport to sell collectible history, much of it on paper.  It’s an experiment with a good chance of success.  The shop will feature a combination of objects, documents, ephemera and books, in other words the new quartet of mixed media collecting.  Bookshops may be closing but shops that mimic the combination of materials that next generation collectors are acquiring stand a good chance of success.


The facility is 1,250 square feet.  Rockwell’s framing operation uses 20%, and the balance- gallery space formerly showing contemporary art- has been given over for the display of appealing historic offerings.  Rockwell staff will explain the objects as well as assist with framing decisions.  When questions exceed the staff’s knowledge, they will link the prospective client by phone or email with Kaller’s or Reznikoff’s offices, depending on ownership of the particular item.


Mr. Rockwell-Desloge, interviewed for this article, suggested he views the symbiotic relationship of collectible objects and art and framing as important to both sides.  He believes both will benefit from the collaboration.

Bookstores, for many years, have been in decline, their single concept too often not strong enough to pay the rent and justify the time and money invested.  The notion of frame-able material on the other hand is positioned close to the bull’s eye of the new collecting paradigm that is subject-centric but scattered with respect to media.  Photography, original art, documents, baseball gloves and bats, a general’s baton, and his love letters are all aspects of the ‘complete’ approach that new style, deep and compelling collections increasingly encompass.


This venture is in some sense a marriage of convenience; framers looking for more work and sellers of history looking for a wider market.  It is a marriage that makes sense.  Whether, in the most logically constructed retail model, framing is equal to content will need to be confirmed.  It could be.