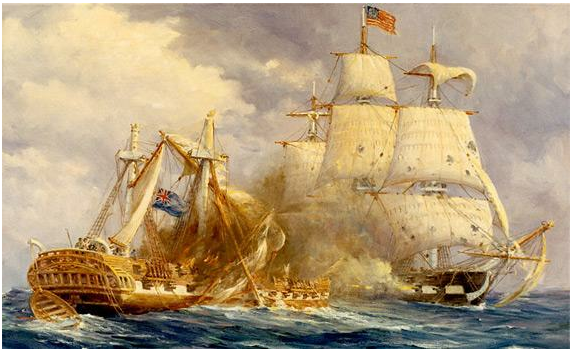 Victory of USS Constitution over HMS Guerriere in War of 1812. Courtesy the Navy Museum

Collecting in the works on paper category has over the years become both easier and more complex.  What was for many collectors once the collecting of rare books has become the collecting of rarities in all the printed forms with an increasing openness to items in related fields.  If you wonder if you are open to possibilities well beyond rare books consider this.


Freeman’s Auctioneers and Appraisers of Philadelphia offered on April 30th 13 lots of mostly American naval flags and pennants from the Collection of H. Richard Dietrich Jr.  The first twelve lots were an extravagant group of flags that once flew on or were associated with the USS Constitution.  The 13th lot was a 13 star flag that did not sell.


Through the efforts of President George Washington the USS Constitution was completed in 1797.  It was one of 6 original frigates authorized for by the Naval Act of 1794 and the 3rd and final one constructed, in time becoming the lone survivor of this early effort to build a United States Navy.  Over her career she would serve in many theatres and be flagship for the Mediterranean and African Squadrons in the 1840s.  It was primarily during this period that the flags in this collection, lots 1-12, were used.  Some are dated by the number of stars, others by notes included with the items.   In that era, but only after 1818, was it mandated to update American flags each July to reflect changes in the number of States by the addition of stars.


During her career many flags were constructed for use on the USS Constitution, their bunting fabric being very thin to encourage them to open up and be visible but also leading to shortened lives.    Their dimensions and designs differed from flag maker to flag maker although the elements; red and white stripes and white stars on a blue background were common to all.    For flags on ships early examples were often sewn and repaired onboard, they ephemeral objects, their survival unexpected.  The few that survive show age and most wind wear.  They are all rare.