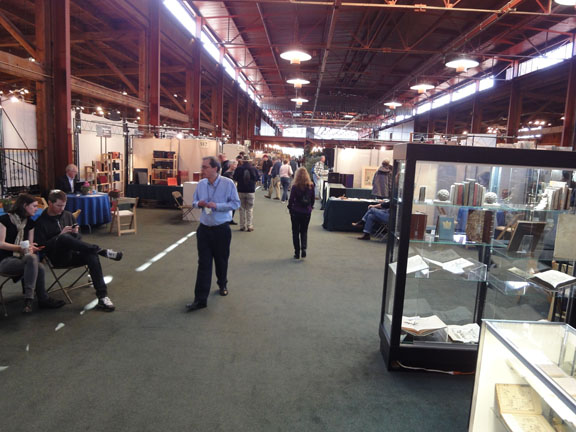 The ABAA’s San Francisco Book Fair has come and gone and participants returned home, left for vacation or moved on to the next show.   For book collectors and institutions these shows are special events, for dealers part of the modern formula for meeting clients and selling books.  By most accounts the show met or exceeded expectations.  Certainly the telltale signs of a good show; a seamless process, good attendance, and anecdotal evidence of satisfactory to robust sales, suggest a successful event that portends well short-term but casts little light on the future.  Such is the state of the rare book field today that a good weekend doesn’t much diminish concerns about the future.  One participating dealer explained it this way.  “Compared to ten years ago today I work twice as hard to make half as much.”


This year the ABAA organizing committee promoted the book fair on sfgate.com, the website created by the San Francisco Chronicle to provide for free what locals are less and less willing to pay for in print, the local news, events, movies, etc.  According to Michael Hackenberg, who was for the nth time, Chairman of the Show Committee, “these activities and other promotional efforts brought in a younger audience, one of the two principal objectives of Committee – the other of course sales.”  For book fairs to thrive they must ever strive to be relevant to the always emerging and elusive next generation.  One regular participant described his recent experience:  “Yes there is new blood but I don’t see the confident wealth that used to convert into substantial sales.  People are busy with other things and today often buy their books in other ways.”


While sales in the trade have weakened generally book fairs have benefited from the widely remarked decline in open shops.   Many booksellers feel the need to participate – for the visibility - and for those eligible, the ABAA fairs are considered the best of the American opportunities.  This trade group also has exchange privileges with other bookseller groups thus permitting ABAA members to exhibit overseas and overseas booksellers to participate in the ABAA’s three annual events.  This year sixty-three of the two hundred-thirty exhibitors in San Francisco were from Canada, Europe and Asia.

Another exhibitor, in comparing the show to ten years ago said, “We have lower expectations.  It’s not the same market.  We adjust.”   This year’s theme was music but by all reports no dirges were heard.


The ABAA also recently reported that it is shifting its LA venue for next year’s fair to Pasadena.  The move is expected to lower costs and increase participation.