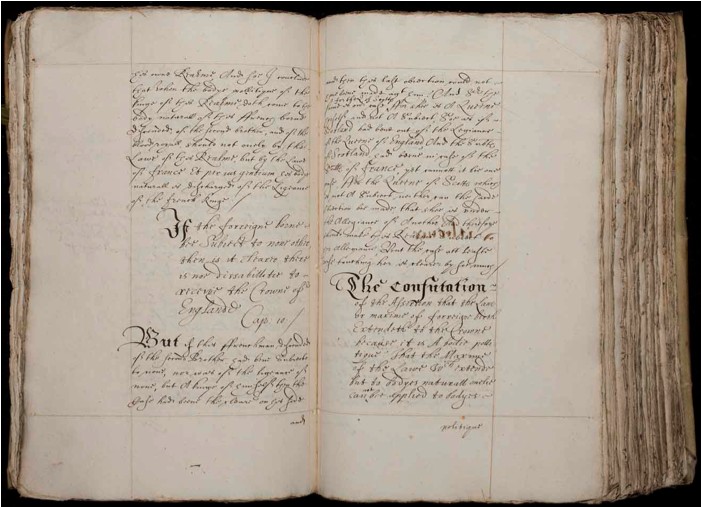 Edmund Plowden argues in defense of Mary Queen of Scots' claim to the throne.

The Elizabethan Club was founded by Alexander Cochrane, a wealthy Yale graduate in 1911. Cochrane was fascinated with Elizabethan England, in particular, Shakespeare and its literature. He had already formed his own Shakespeare collection when he came upon the idea to form a club at Yale. It would be a club where people of similar interests could go to read books and discuss the literature. It was sort of the social network of its time, with the minor exception that instead of watching videos of people doing stupid things and injuring themselves, they discussed Shakespeare. Among Cochrane's contributions to the club was a library, which he determined would belong to the club, not the university library. This is why there are books belonging to the Elizabethan Club, along with the law library, in this display.

This exhibit focuses more on legal issues, with works relating to legal practice, the always contentious church-state relations, court jurisdiction, textbooks, and even a play performed at the Inn of Court. The works range from 1570 to the 1670s. One deals with legitimacy of the claims to the throne of Mary Queen of Scots, which combines religious, national, and familial disputes all into one. Queen Elizabeth, the last surviving child of Henry VIII, was childless, leaving the inevitable question. For many, the answer to that question was Mary of Scotland, former Queen of France (until the King died), and Elizabeth's cousin and presumptive heir. However, Mary was Catholic, not a positive in England after Henry's renunciation of the Church and the bloody rule of Elizabeth's Catholic half-sister, Bloody Mary. Mary Queen of Scots ran into her own issues in Scotland, so she escaped to the protection of Elizabeth in England. Not a good move, especially since she appeared interested in replacing Elizabeth. Elizabeth held her under house arrest for 19 years before finally having her executed. Nevertheless, it was Mary's son James I who succeeded Elizabeth to the British throne.

This look at Elizabethan England is curated by Justin Zaremby, a 2010 graduate of the Yale Law School, assisted by Rare Book Librarian Mike Widener. It will be continuing until May.